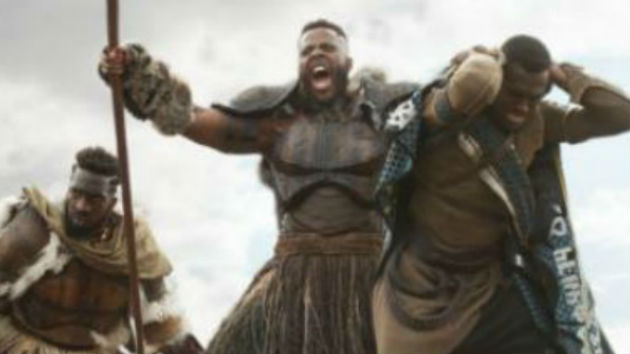 (LOS ANGELES) — (SPOILERS AHEAD) Winston Duke is pretty lucky. Not only did the actor’s character M’Baku survive Thanos’ deadly snap at the end of Avengers: Infinity War, but he’s apparently had a peek at its follow-up, Avengers: Endgame.

“Honestly, what I can tell you is that it’s bigger than Infinity War,” he dished to Entertainment Tonight. “It’s going to be a lot of fun, going to be crazy, and [Marvel Studios] has a way of still topping themselves when you feel like they might have jumped the shark. They still have a way of making it new.”

Duke told ET that he had no idea that his character would survive Thanos’ Infinity Gauntlet-powered finger snap, which turned half of the universe’s population to dust, including heroes like Spider-Man and Black Panther.  Those developments left fans stunned, and Duke says he can relate.

“I went through the same thing, too,” he admitted, adding, “I didn’t know anyone was going to die. They shot things separate. Even some of the people who died didn’t know they were going to die.”

And in the non-Marvel cinematic universe, Duke is lucky, too: He stars in Jordan Peele’s new horror movie i, which is a huge box-office smash.Avengers: Endgame opens April 28 from Marvel Studios, which, like ABC News, is owned by Disney.

Colleges in Washington state must now provide COVID-19 quarantine facilities as cases spike, governor says
Jill Biden says she feels ‘positive energy’ about race but ‘not taking anything for granted’
Jennifer Garner reveals her mother is the reason why she’s so down to earth
Coronavirus live updates: US surgeon general tweets herd immunity could lead to many deaths
Officer in Breonna Taylor shooting says he would have done things differently
Pregnant woman ran a mile in less than 6 minutes a week before her due date