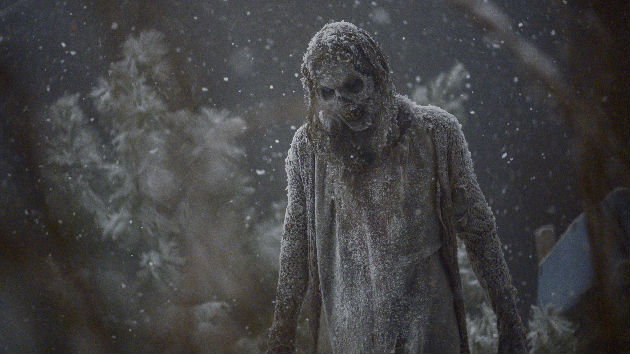 (LOS ANGELES) — Sunday’s ninth season finale of The Walking Dead starts with Ezekiel on the radio gear: “Finally broke. And I can’t fix it. Fire raged. The rot spread.” The Kingdom, already in mourning after the deaths of Henry, Tara, and their other friends at the end of last week’s episode, has apparently suffered catastrophic fires.   Carol is gathering the belongings of her adoptive son, Henry; Ezekiel rolls up the charter. Its citizens gather in a caravan.  The Kingdom has fallen.As the caravan shambles along, it becomes obvious The Whisperers are observing them, making sure they leave.Everyone’s suspicious of Lydia, including Carol. “Every time I look at her I see him,” she says of Henry, who died because of her — and got all the others killed, too.A snowstorm is approaching and the refugees are exposed.  At Alexandria, the snow has knocked out the solar panels, taking out the electric heaters. They make plans to get the fireplaces going, and release Negan from his cell so he doesn’t freeze.On the road, Ezekiel tells Daryl he doesn’t want him around Carol any more. He also blames Daryl for Henry’s death.Lydia walks off on her own and finds a walker trapped in ice, but still biting. She exposes her arm and is about to allow it to bite her, when Carol shames her back to reality. The refugees need shelter, and find The Sanctuary.At Alexandria, Eugene, Negan, Rosita, Judith and others are trying to stay warm by the fire in a room, when a clogged flue extinguishes it. The blizzard is full on. At Sanctuary, Carol, Daryl and the other refugees shiver in the cold. Together, they plot to cross Alpha’s territory to get to another way station, and set off.  At Alexandria, there are whiteout conditions. Judith hears Dog and runs toward the sound, disappearing into the storm. Negan breaks from the others and runs after her. Meantime, the refugees continue their perilous walk through enemy territory, and across a frozen lake. Walkers materialize from beneath snowdrifts. Lydia wanders off and Carol finds her. The girl is wracked with guilt and wants to die: “This is how you keep from losing anyone else.”Her eyes filled with tears, Carol ignores her request and leads her back. Meanwhile, in the snow, Negan is looking for Judith, when windblown debris slashes his leg. He finds her and she’s found Dog, but is too weak to walk. Negan puts her over his shoulder and carries her.At Sanctuary, Carol tells Ezekiel that she’s headed to Alexandria without him. “I’ll never stop loving you,” he says. “And I’ll never forget the fairy tale,” she tells him.The storm passes.  Michonne, Carol, Daryl and the others reach Alexandria. They play in the snow, reunited. Michonne visits the infirmary, where Negan is being treated, and thanks him for saving Judith. “She’s a special girl, and you’ve been through enough,” he says.  Back at the Whisperer camp, Alpha tells Beta she needs to be stronger “for what comes next.” “You will be,” he warns, and begins whipping the arm she offers him. Ezekiel ends with an optimistic broadcast via radio to Judith, at Alexandria. He walks away from the radio, and the camera lingers on it. Static. Then, a garbled voice breaks through: “Hello?…Is anybody out there?” it asks.

Season ten of The Walking Dead premieres this fall on AMC.

Major fire threat on way to California while fire danger and winter storm expected in Colorado Saturday
The Electoral College: How presidents are elected
Rising infections in Idaho highlight the virus’ latest target: Rural America
Wunmi Mosaku would “run for the hills” if she were actually in her Netflix horror movie ‘His House’
Jennifer Dulos’ family wants her declared dead to bring ‘closure,’ attorney says
‘The Spanish Princess Part Two’ stars talk representation in the royal court