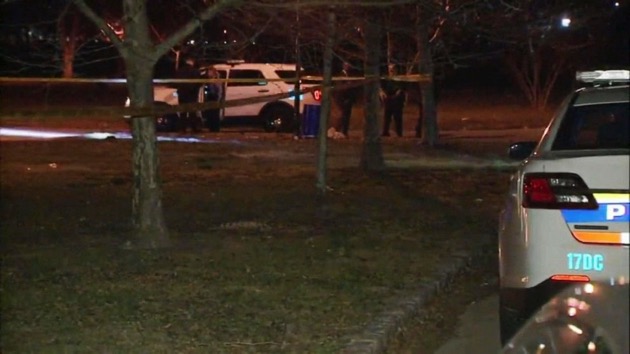 (PHILADELPHIA) — The 20-year-old son of the Philadelphia police’s chief inspector of internal affairs was shot dead this weekend in a “random encounter” and now the grieving department is looking for answers.When officers responded to FDR State Park at about 10 p.m. Saturday, they found Nicholas Flacco, 20, shot once in the chest, according to the Philadelphia Police Department. He was pronounced dead at 10:17 p.m., police said.Flacco had been tailgating with friends for the Philadelphia Phillies game when “several fights began to break out” between groups in the crowded park, police told reporters Monday. Flacco was allegedly trying to break up a fight between a group of women when one woman threatened to “call her man,” police said. A man shortly after showed up at the park with a gun, police said.Flacco’s friends allegedly dared the man to shoot them because they did not think the gun was real, police said.At some point, Flacco was shot.”It appears this individual deliberately fired a round to his chest and took his life,” Philadelphia Police Commissioner Richard Ross told reporters.”All indications are that the people out there did not know him … There’s no suggestion that he was involved in the initial argument whatsoever — that’s what makes it even more confusing,” Ross said. “There’s a lot of things we don’t know.”No arrests have been made and no gun was recovered, a police spokesman said Monday.The victim’s father, Chris Flacco, is the chief inspector of internal affairs at the Philadelphia Police Department, reported ABC Philadelphia station WPVI.”It does hit very close to home,” Ross told WPVI. “I’ve known Chief Flacco for probably 25 years at least. So our hearts are broken. We’re keeping him and his family in our thoughts and our prayers.”Nicholas Flacco was in his fourth semester at Penn State University, said university spokeswoman Lisa Powers.”Random acts of violence such as this are unfathomable and very troubling,” she told ABC News via email on Monday. “This news is tragic and we offer our deepest condolences to Nicholas’ family and friends during this difficult time.””Every life lost to violence is one too many,” Philadelphia Mayor Jim Kenney said in a statement obtained by WPVI. “It is all the more tragic when we lose a young person who had their whole life ahead of them.””I extend my deepest sympathies and condolences to Chief Inspector Flacco and his family, the Police Department, and all who have lost loved ones to senseless gun violence,” Kenney said. “PPD [The Philadelphia Police Department] is undergoing a thorough investigation and I urge the public to come forward to report any tips that can help find the person who did this.”A $35,000 reward has been offered.”Our thoughts and prayers are with the Flacco family and our fellow police officers will close this case with help from the public,” Philadelphia Fraternal Order of Police (FOP Lodge 5) President John McNesby said in a statement.Anyone with information is asked to call the Philadelphia Homicide Unit at 215-686-3334 or 215-686-TIPS.  Copyright © 2019, ABC Radio. All rights reserved.