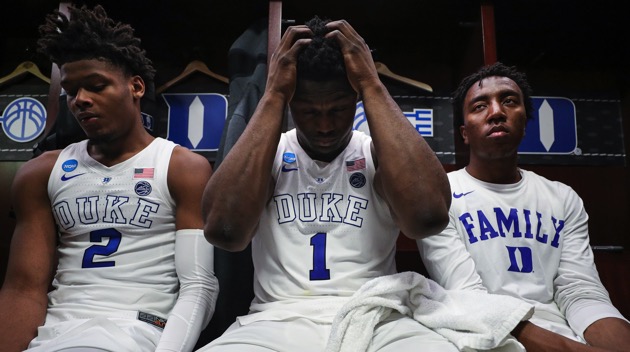 (NEW YORK) — After a weekend of comebacks, buzzer beaters and overtime thrills, the Final Four is set. What is perhaps the biggest headline of the weekend: Duke is out.The overwhelming Final Four and championship favorite fell to No. 2-seeded Michigan State. Nearly 40 percent of all March Madness brackets picked Duke to win the NCAA men’s tournament, which now has Michigan State, Auburn, Virginia and Texas Tech in the Final Four.Duke — the tournament’s overall No. 1 seed, with a consensus overall No.1 pick in the upcoming NBA draft, freshman Zion Williamson, couldn’t pull off another late game miracle. Williamson spoke about his disappointment to reporters after the game, saying the team has likely just played together for the last time. “[You] look around the locker room and see, like, your teammates and your brothers…and you just think, you know, this group will probably never play together again,” he said.As for the Spartans, the advancing team’s most famous alum, Magic Johnson, was in attendance for the celebration, while Duke players were inconsolable. For the other teams moving on in the tournament, Aurburn and Texas Tech are both making their first trips to the Final Four. Virginia will appear for the first time since 1984.