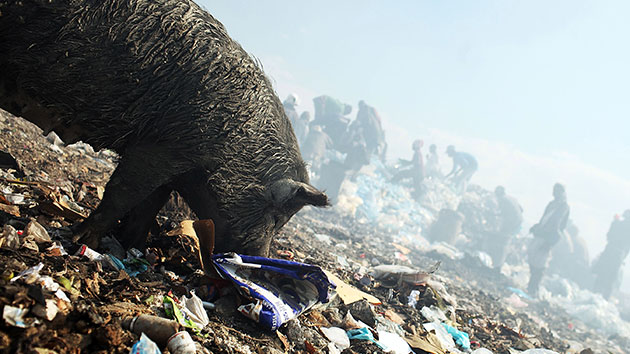 (NEW YORK) — A report published Friday details a severe case in which a tapeworm infected an 18-year-old Indian boy’s brain, eventually leading to his death two weeks after he was admitted into an emergency room.The infection, called cysticercosis, is caused by the larva of a parasite called Taenia solium — the pork tapeworm — which create cysts in various parts of the body. In the United States, there are about 1,000 hospitalizations from the infection every year. The Centers for Disease Control and Prevention (CDC) considers the disease one of five neglected parasitic infections that are in need of public health efforts to improve monitoring, prevention and treatment.Here’s what need to know about cysticercosis and the parasite that causes it.The infection is transmitted by the larva of the tapewormCysticercosis is transmitted via infected human feces containing the microscopic eggs of the T. solium tapeworm. One way this can happen is from being infected by the tapeworm — called taeniasis — then shedding the eggs in stool. If the eggs make it to the person’s food or another person’s food, then that person is at risk of cysticercosis, which causes the cysts to develop anywhere in the body, including the muscles, heart, eyes, brain or spinal cord. Although pork itself cannot give a person cysticercosis, pork that’s not cooked properly can pass on the taeniasis.The parasite mostly appears in underdeveloped countriesT. solium is most commonly found in Latin America, Asia and sub-Saharan Africa, where there is poorer sanitation and pigs are more likely to come into contact with human feces. As many as 8.3 million people in these regions are estimated to be suffering from neurocysticercosis, the version of the disease that affects the brain and spinal cord, according to the World Health Organization. The 18-year-old boy described in the report also had neurocysticercosis.In the U.S., approximately 2,000 people are hospitalized each year due to neurocysticercosis. Although most cases of the disease in the U.S. occur in those traveling from other countries, up to 15% of those who die from cysticercosis have never left the country. It is estimated that about 2% of emergency room visits for seizures were due to neurocysticercosis.The most severe symptoms are actually pretty rareSymptoms of cysticercosis depend on the location and size of the cysts, and can range from no symptoms at all to headaches, seizures, stroke or death.Neurocysticercosis is the most severe form of the infection, and up to 49% of people with it experience recurrent seizures four years after infection. It’s also the most common cause of seizures worldwide. The Indian boy who died experienced uncontrollable seizures despite treatment with high-dose steroids and anti-seizure medications.Neurocysticercosis can be diagnosed with brain scans, but not everyone has accessDiagnosing neurocysticercosis usually involves spotting the cysts through brain scans, such as a CAT scan or MRI. Although this can easily be done in the U.S. and other developed countries, it’s more difficult in the rural areas of underdeveloped countries where there is a lack of resources and a high amount of cases. Blood tests can also help identify if a person is infected elsewhere in the body. If a person is diagnosed with cysticercosis, it is important to test other household members as well, since they are at much higher risk of becoming infected. Tests will determine if they have the tapeworm, cysts or are all clear.Treatment of the cysts is a process that depends on the severity of the diseaseDepending on the symptoms and distribution of the cysts in the body, treatment will usually focus on controlling the symptoms of the infection first, including the seizures and swelling of the brain. This might involve administering anti-seizure medications or steroids.

You can avoid getting infected by taking these simple steps, especially when traveling abroadWash your hands. Scrub with soap for at least 20 seconds and then fully rinse with clean, running water.Avoid eating foods that might be contaminated with human feces. Make sure all fresh foods are thoroughly washed in clean water and that food handlers practice safe hygiene practices.

When traveling to developing countries, drink only bottled or boiled water, or filter your water through a filter 1 micron or less and use iodine tablets.