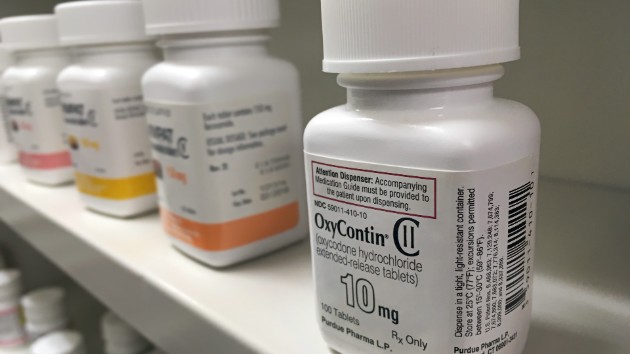 (ALBANY, N.Y.) — New York State is suing the family behind the company that makes OxyContin, expanding an already existing lawsuit against other opioid manufacturers and distributors.New York state Attorney General Letitia James is including eight members of the Sackler family, which owns drug manufacturer Purdue Pharma, in the lawsuit. The amended suit claims the family continued to profit by using a web of corporate entities to fraudulently transfer money to themselves even after being under investigation by federal prosecutors for its opioid marketing practices. It also alleges the Sacklers moved money to offshore accounts while taking payments from Purdue and while being investigated by many states’ attorneys general.In impassioned language, James’ office painted a stark picture of the toll of opioid abuse and laid the blame squarely at the feet of the Sacklers, Purdue Pharma and other drug manufacturers.”The taproot of the opioid epidemic is easy to identify: OxyContin,” the lawsuit states, alleging that Purdue launched a nationwide marketing campaign in 1996 “that relied on deception and insider payoffs” to popularize the drug and overcome the medical communities’ concerns about its addictive properties.”New York State is in the throes of an opioid epidemic that has ravaged the lives of its residents and drained its public coffers for more than two decades,” the amended lawsuit states. The defendants “deliberately betrayed” duties to responsibly prevent drug abuse “through a persistent course of fraudulent and illegal misconduct, in order to profiteer from the plague they knew would be unleashed.” Purdue Pharma faces about 2,000 lawsuits related to the opioid crisis. Sackler family members are being sued in a small number — about 25 — of those cases, according to Paul J. Hanley, Jr. who is the co-lead in the multi-district litigation against opioid manufacturers. He described James’ actions to include the family members on Thursday as “a welcome addition to the litigation.””It is probable that many more cases will be filed against them and that existing cases will be amended to add them,” Hanley wrote in an email to ABC News.In a statement, Purdue Pharma and the Sackler family members who were named in the lawsuit said they “vigorously deny the allegations in the New York State Attorney General’s amended complaint, and will continue to defend themselves against these misleading allegations.””Such serious allegations demand clear evidence linking the conduct alleged to the harm described, but we believe the state fails to show such causation and offers little evidence to support its sweeping legal claims. Instead, the state is seeking to publicly vilify Purdue and its former directors while unfairly undermining the important work we have taken to address the opioid crisis,” the statement in response to James’ amended suit continued.The Sacklers, who are worth billions, are facing increasing censure from financial and philanthropic institutions for their role in manufacturing and marketing OxyContin.The family members defending themselves in response to the lawsuit also issued a statement saying, “Expanding this baseless lawsuit to include former directors of Purdue Pharma is a misguided attempt to place blame where it does not belong for a complex public health crisis. We strongly deny these allegations, which are inconsistent with the factual record, and will vigorously defend against them.” Jones’ office alleges that opioid manufacturers used a common “playbook” to manipulate public opinion about the safety and risk of prescription opioids.”Manufacturers pushed claims that opioids could improve quality of life and cognitive functioning, promoted false statements about the non-addictive nature of these drugs, masked signs of addiction by referring to them as ‘pseudoaddiction’ and encouraged greater opioid use to treat it, and suggested that alternative pain relief methods were riskier than opioids, among other grossly misleading claims,” Jones said in a press release.The attorney general also said the drug companies mobilized an army of sales representatives, or “detailers,” to aggressively promote their messaging and to “target susceptible doctors, flood publications with their deceptive advertisements, and offer consumers discount cards and other incentives to entice them to request treatment with their products,” Jones’ statement said.Nine people who live in New York State and 130 people across the U.S. die every day from opioid-related deaths, the lawsuit said.”These people are not — and cannot become — just statistics,” the New York lawsuit states. “They are our family, our friends, our neighbors. They are our fathers and our sons, our mothers and our daughters. They have real names and their deaths have left real, jagged holes in the fabric of the communities where they used to live.” Copyright © 2019, ABC Radio. All rights reserved.

“Oh, it’s fantastic!” Diane Lane loves the fans prompting the release of the ‘Justice League’ “Snyder Cut”
Liam Neeson reveals his plans to retire from action films
Two US COVID variants have been identified. What does that mean for vaccines?
‘Cobra Kai’ star Martin Kove had to be “persuaded” to join the ‘Karate Kid’ reboot
Nestle delivers sweet taste of nostalgia with new Cinnamon Toast Crunch milk
PepsiCo announces plan to reduce emissions more than 40% by 2030