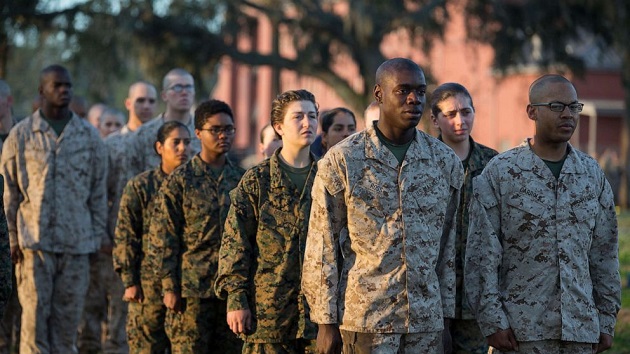 The service will now assess the company’s training results to determine whether the Marines should pursue this training model in the future, the Marines told ABC News.Unlike the Army, Navy and Air Force, the Marine Corps has not fully integrated women and men during recruit training. Instead, at Recruit Depot Parris Island in South Carolina, males and females carry out the same training but live separately — the first three battalions are all-male, while the fourth battalion is all-female. Marines with India Company, 3rd Recruit Training Battalion, are the service’s first group to graduate from Parris Island as a combined company.The Marine Corps, which has the lowest percentage of women among the services at just under 9 percent, decided to incorporate the approximately 50 female recruits into the historically all-male battalion in January because the recruiting classes are typically much smaller in the winter months. The integration allowed Parris Island to not activate 4th Recruit Training Battalion staff for a single female platoon.”Marine Corps Recruit Depot Parris Island will assess the results of India Company’s training and future opportunities that may permit this company training model,” Parris Island said in a statement.But there will not be opportunities to repeat the model in 2019, spokesperson Warrant Officer Bobby Yarbrough told ABC News.The commanding general of Parris Island stood by the Marine Corps’ boot camp model, calling India Company’s graduation “a testimony to two indisputable truths about recruit training.””…Our platoon model is, and remains, the proven and ideal method for making Marines and a single company, comprised of male and female platoons, is a practical training option when the conditions permit,” Brig. Gen. James Glynn said in a statement.The female recruits were led by female drill instructors, but lived in separate quarters of the same barracks as their male counterparts. Otherwise, the training of the integrated company of about 300 recruits was identical to previous training cycles.Series commander Capt. Tiffany Aguiar said the only major difference with the integrated company was the convenience of being located with the men in order to carry out major training events together. Sixty percent of the 13 weeks of recruit training has male and female recruits either training together or side by side, according to the Marine Corps.Company commander Capt. Trenton Snody added that the integrated group was “competitive” and “no better or worse” than other companies, but the final assessment has yet to be conducted by the Marine Corps.Aguiar and Snody told ABC News there were no disciplinary issues with the integrated company.Two Marines who were part of the history-making company appeared unfazed by the integration.Private First Class Kyle Watson of Stroudsburg, Pennsylvania, and Private First Class Harley Annmesiemore of Greensboro, North Carolina, agreed that they could look to both their “brothers” and “sisters” during training for help.”[The female recruits] may help me in a way that I had no clue I could get a task accomplished,” Watson said, adding, “It was good to have a different perspective.”In an interview on the eve of their graduation from Parris Island, the two Marines spoke passionately about how they kept themselves motivated during the oftentimes grueling 13 weeks of boot camp.”You just have to keep your head up, and the only thing you can do is just keep your eyes open and keep pushing no matter how tired you are, no matter how much pain you’re feeling,” Annmesiemore said. “You know that it’s worth it in the end.”Copyright © 2019, ABC Radio. All rights reserved.

‘Tiger King 2’ and more: Netflix introduces itself as “The Home of True Crime”
Patina Miller explains why she loves the “challenge” of playing Raquel in ‘Raising Kanan’
Democrats lash out at Biden administration over handling of Haitian migrants
Mom dying of ovarian cancer shares what she wants women to know about the deadly disease
First ‘SNL’ guests of the season: Owen Wilson, Kim Kardashian West, Rami Malek, and Jason Sudeikis
“No one is safe. Not one of you.”: Johnny Depp decries ‘cancel culture’