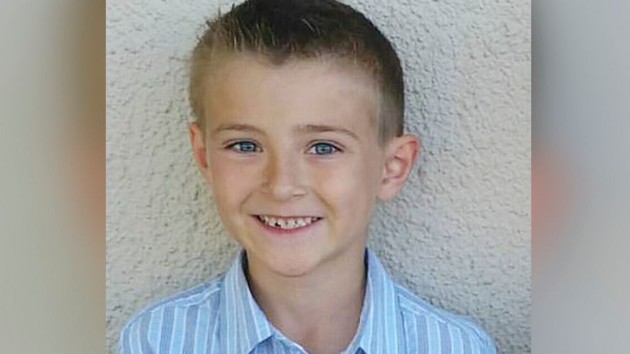 (CORONA, Calif.) — Weeks after 8-year-old Noah McIntosh vanished, his father has been charged with first-degree murder, police announced Friday. But authorities are still searching for the boy’s body. The case began on March 12, when police in Corona, California, responded to a welfare check on Noah after his mother, Jillian Godfrey, contacted the department saying she was concerned about his whereabouts, police said.Godfrey said she hadn’t been able to reach her son for almost two weeks, police said. Officers tried to contact his father, Bryce McIntosh, but he didn’t answer, police said.”On March 13, a search warrant was authored and served at Bryce’s apartment,” the Corona Police said in a statement. “The evidence discovered provided detectives probable cause to arrest Bryce McIntosh and Jillian Godfrey for child abuse. The evidence also led investigators to several locations throughout the county.” “At the locations … we did collect trace evidence that leave no doubt that Noah is the victim of a homicide,” Corona Police Chief George Johnstone said at a Thursday news conference. A first-degree murder charge was filed Thursday against Bryce McIntosh, including a special circumstance murder of torture, Riverside County District Attorney Mike Hestrin said.If he is convicted of all charges, he could face life without possibility of parole and would be eligible for the death penalty, Hestrin said. “I’m not prepared to discuss the motive. We do believe there is motive for this to have occurred,” Johnstone said.Johnstone said Bryce McIntosh was not cooperative with the investigation and that Godfrey “has very limited information.” “It does not make sense that the parents of an 8-year-old child would not know his whereabouts or be able to get give you specific details of when he was last seen,” Johnstone said. “This tears at the heart of every person that has touched this case,” the chief said. “There is no more trust a child should have than in their parents.”Godfrey remains in custody on child abuse charges, officials said. She is not charged in connection with her son’s death, officials said. Though Noah remains missing, the police department said officers “will remain steadfast” in their search until the boy is found. Police do not know the specific date of the alleged killing and are asking for the public’s help, Johnstone said. “We ask our community to reflect back to February 20 through March 12,” the police department said. “Any community members that may have seen Noah, suspect Bryce McIntosh, his vehicle a black BMW 330i, CA license 5MKE807, or Jillian Godfrey are asked to contact the police department.”Copyright © 2019, ABC Radio. All rights reserved.