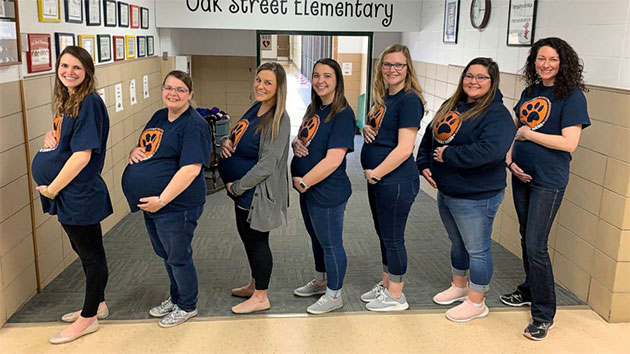 (GODDARD, Kan.) —  One plus one equals two and seven teachers pregnant at one elementary school equals a baby boom.

Seven of the 15 classroom teachers at Oak Street Elementary School in Goddard, Kansas, told the school’s principal during this school year that they are pregnant.

“I was very excited, obviously, because this is great news,” said Ashley Miller, the school’s principal. “After the third one I was a little in shock, the fourth one I was really in shock, the fifth one I didn’t know what to say and by the seventh one I had to remember to congratulate her because my first words were, ‘Are you kidding me?"”

Miller, a 20-year veteran of the elementary school added, “I have never in my life had this many pregnant people in the building. Never happened.”

Two of the seven teachers gave birth to their babies, two healthy girls, this week, one on Wednesday and one on Thursday, according to Miller.

Luckily for Miller, the teachers’ pregnancies are spread out so not all seven teachers will be on maternity leave at once. The school is using substitute teachers to fill their spots while they are on leave.

The final three babies are due in October.

The school is already a tight-knit community and the experience of going through pregnancies together has bonded them even more, both Miller and the teachers say.

“It’s so much fun to see the other mommies in the hall and we’re asking each other, ‘How do you feel,’” said Kelli Jo Sheahon, a fourth-grade teacher expecting twins in October. “I don’t know that a lot of other people get that experience at work.”

The cafeteria staff have taken to keeping a stash of crackers in the kitchen for the teachers, according to Sheahon, who was the sixth teacher to tell Miller her pregnancy news.

Kaylee Busick, a first-grade teacher who is due in July with a boy, was the fourth teacher to reveal her pregnancy news.

“I remember the [third teacher] was like, ‘Oh, Miller is going to kill you when she finds out,"” Busick said with a laugh. “And then other people told after me so I felt better.”

At least three of the teachers are planning to give birth at the same hospital. Their kids will all likely enter kindergarten at Oak Street Elementary School together in a few years.

“Some of us have had kids who have all been through Oak Street,” Miller said. “We do a lot of evening activities [together] so this place is crazy when we do that because we all bring our kids.”

The school was recently approved for a renovation that will start in May, at the end of the school year. Miller said she wishes they had included a nursery in the renovation, but may still ask for one.

“I don’t think I’m going to get that but I’ll always ask,” said Miller, who also joked (but not really) that the school needs to be sponsored by a diaper company.

The teachers meanwhile said they have already received their fill of “it must be in the water” jokes.

“I had someone tell me before I announced, ‘Don’t drink the water,’ and in my mind I was like, ‘Too late,"” recalled Sheahon.

The teachers’ baby boom comes the same week as nine nurses — all of whom work in labor and delivery — made headlines by being pregnant and all due between April and July this year. In a North Carolina town, seven women married to firefighters at one fire station are all pregnant and due between now and September.