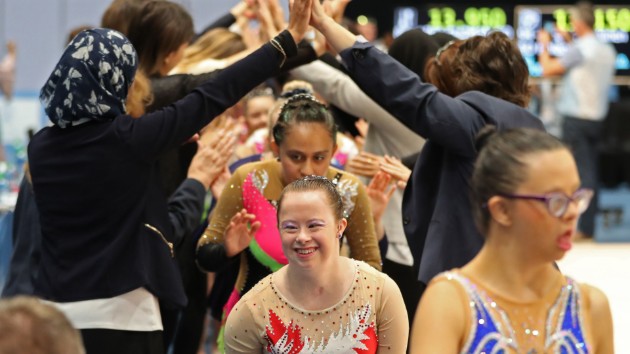 (WASHINGTON) — President Donald Trump on Thursday said the administration will fund Special Olympics following a whirlwind of criticism this week over the White House’s budget proposal that had eliminated federal funding for the program.”The Special Olympics will be funded, I just told my people,” Trump told reporters outside the White House. “I want to fund the Special Olympics and I just authorized funding of the Special Olympics.” Education Secretary Betsy DeVos said in a statement she was pleased with the president’s decision.“I am pleased and grateful the President and I see eye to eye on this issue and that he has decided to fund our Special Olympics grant. This is funding I have fought for behind the scenes over the last several years,” DeVos’ statement said.Prior to Trump’s comments on Thursday afternoon, DeVos faced more backlash at a hearing in the morning on Capitol Hill over the Trump administration’s proposal to cut federal funding for the Special Olympics. Despite Trump’s comments on Thursday afternoon, Congress is ultimately responsible for approving the budget that is proposed by the administration.In a heated back-and-forth with Sen. Dick Durbin, D-Ill., DeVos defended the administration’s “tough choices and decisions,” saying she did not personally approve the cuts, but forcefully pushed back against criticism.“Let’s not use disabled children in a twisted way for your political narrative,” DeVos said when answering questions from Sen. Durbin. “That is just disgusting and it’s shameful.”Durbin, in response, said the proposed cut was “shameful.”“I am not twisting it, I asked you to answer yes or no, and you said you did not personally approve this,” Durbin said.DeVos told the committee that she loved the Special Olympics and had contributed a portion of her salary to the organization.Durbin went on to criticize decision-makers at the Office of Management and Budget, saying, “Whoever came up with that idea at OMB gets a Special Olympic gold medal for insensitivity.”DeVos has faced significant backlash this week over part of the administration’s budget proposal that would eliminate $17.6 million for the Special Olympics. The full budget proposed a decrease of $7.1 billion for education funding overall.The proposal to cut funding for the Special Olympics has been part of past Trump administration budget proposals. The chances that the budget will get passed as it is in this first iteration is highly unlikely.Following Trump’s announcement that he would fund the Special Olympics, second lady Karen Pence also tweeted a thank you to the President.”Thank you, Mr. President! Love the @SpecialOlympics!” she wrote.On Wednesday, the chairman of the Senate appropriations subcommittee, Sen. Roy Blunt, R-Mo., issued a statement saying that the subcommittee would “not cut funding for the program.”“I’m a longtime supporter of Special Olympics and proud that Missouri is home to the largest Special Olympics training facility in the world,” Sen. Blunt wrote. “I was just at the World Games and saw, as I have many times before, what a huge impact the organization has on athletes, their families, and their communities. Our Department of Education appropriations bill will not cut funding for the program.”Copyright © 2019, ABC Radio. All rights reserved.

Trump dismisses pandemic, rips Fauci as ‘disaster’ in campaign all-staff call
Election 2020: Why voting in the coronavirus pandemic will be unlike any other year
Trump heads into final campaign stretch forced to play defense against Biden
Dems and counter-protestors at DuBois City Park over weekend, no major incidents
RNC chair defends Trump, challenges Michigan governor’s handling of pandemic
Not just a Trump-touted ‘cure’: Monoclonal antibodies may be ‘bridge’ to coronavirus vaccine