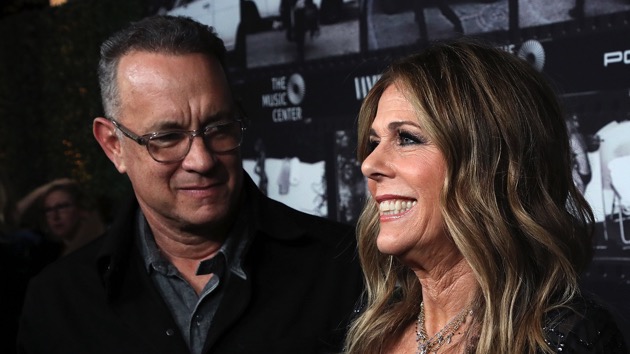 (NEW YORK) — Rita Wilson and Tom Hanks are one of the most respected and beloved Hollywood couples around, so it should come as no surprise that when she found out about her breast cancer diagnosis four years ago, she handled the situation with class and a bit of humor.Wilson, a singer and actress, announced in 2015 she had gotten through the cancer, but this week, she revealed in an Instagram post that in the event she did not survive the disease, she had some choice words for her Oscar-winning husband.”Four years ago when I was diagnosed with breast cancer, I had so many different thoughts. You’re scared, anxious, you think about your own mortality,” she wrote this week on Instagram.Next, Wilson revealed how a brave decision turned into inspiration for her music.She continued, “So I had a serious discussion with my husband that if anything happens, I wanted him to be super sad for a very long time and I’d also like a party, a celebration. Out of that story, I wrote ‘Throw Me a Party’ with @lizrose0606 and @kristianbush —3 DAYS until my new album #halfwaytohome is released.”Hanks and Wilson have been married for well over 30 years and Wilson has three studio albums to her credit, along with dozens of movies she’s been featured in. Half Way to Home will be her fourth effort and is obviously inspired by her life.In early 2015, Wilson told People magazine, “I have taken a leave from the play Fish in the Dark to deal with a personal health issue. Last week, with my husband by my side, and with the love and support of family and friends, I underwent a bilateral mastectomy and reconstruction for breast cancer after a diagnosis of invasive lobular carcinoma.”Months later, she announced at the Tony Awards that she had recovered from the disease.Copyright © 2019, ABC Radio. All rights reserved.

Priyanka Chopra Jonas reveals how being bullied gave her thick skin
Teen speaks out after alerting FBI about father’s alleged role in US Capitol siege
One dead after car strikes multiple pedestrians in Portland, Oregon
Republicans in some battlegrounds left GOP after Capitol riot
DOJ nominee Kristen Clarke wants to make the promise of ‘justice for all’ a reality
Charo says she finds the Hilaria Baldwin cultural appropriation controversy “funny”