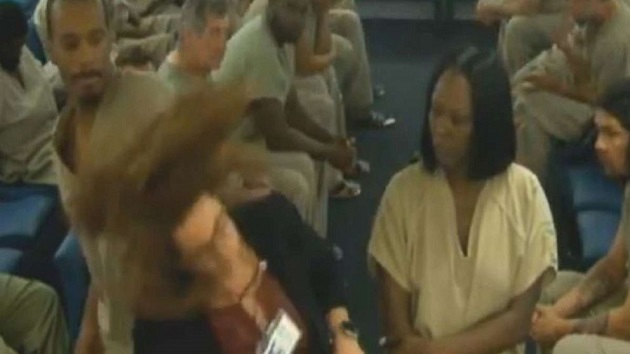 (MIAMI) — A Florida defense attorney was taken to the hospital on Wednesday after an inmate punched her in the head during a bond hearing, knocking her to the courtroom floor.Assistant public defender Julie Chase was looking down at a piece of paper when 27-year-old William Green jumped out of his seat at the Broward County Courthouse and sucker punched her, courtroom video showed. The attack caught the crowd of defendants, and the judge, by surprise.”What happened?” Judge Jackie Powell asked as court bailiffs rushed to tackle Green.Chase was taken to Broward Health Medical Center for evaluation. She told reporters that she was doing better after the visit.The punch “was a bit of a shock,” she told Miami ABC affiliate WPLG-TV while leaving the hospital.”I didn’t expect it, but I’m doing OK,” she added.Green, who was accused of attacking a worker at a mental health facility, is now facing additional battery charges. Broward County public defender Howard Finkelstein said the suspect appeared to be suffering from a mental illness.”In 40 years this is the first time one of my attorneys has been attacked,” Finkelstein said in a statement. “This has a chilling effect on my team because we are committed to our work. This is not part of the job description.”The Broward County Sheriff’s Office said it would tighten inmate security during court hearings going forward.”BSO has received numerous requests from the public defender’s office asking for a more lax approach to our security procedures during magistrate hearings,” Broward County Sheriff Gregory Tony said in a statement Wednesday. “Although I understand their concern that having deputies standing close to the inmates or having them wear handcuffs or shackles could imply guilt, they must in turn understand that their requests made it possible for this unusual situation to occur.”He said all inmates will be restrained during magistrate hearings from now on.”As the senior ranking law enforcement official for Broward County, I am obligated to ensure all policies related to the protection and safety of our court officials are enforced,” Tony said. “Effective immediately, all inmates will be handcuffed during these proceedings as to reduce the ability of an inmate to cause similar harm or greater.”