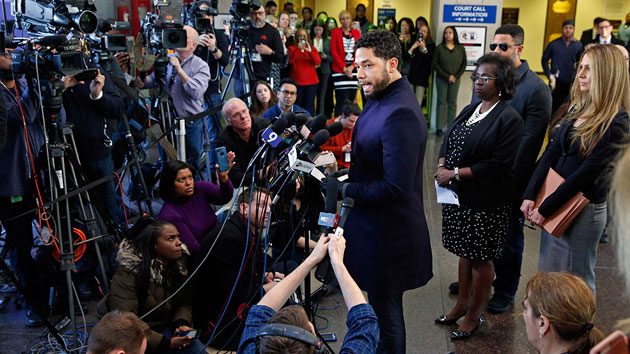 (CHICAGO) — Even those who believed Jussie Smollett didn’t fake that January 29 hate crime attack against him in Chicago had to be shocked Tuesday when Cook County, Illinois prosecutors announced they’d dropped all 16 felony charges against the Empire star.

Now that some of that shock’s worn off, the question remains of why, exactly, prosecutors dropped the charges, and whether Smollett will face any penalties at all.  And as it happens, the move doesn’t mean Smollett’s completely out of the woods.

Cook County prosecutor Joe Magats told ABC News affiliate WLS Tuesday that he still believes Smollett’s story is a hoax and that his decision to drop the charges “was not an exoneration” of the actor.  However, he noted that he doesn’t believe Smollett “is a driver of violence or a violent individual.”

Magats also said that “In return for forfeiting his bond to the City of Chicago and doing his community service, we agreed to dismiss the charges against [Smollett]. He did community service for Operation Push.”  The bond amount forfeited, buy the way, was $10,000, ten percent of Smollett’s $100,000 bond.

So what, exactly, was that community service?  For their part, the Chicago-based Rainbow PUSH Coalition confirmed in a statement on their website that Smollett had “given of himself to our organization and the movement for social justice.”

A spokesperson further told WLS Smollett spent eight hours a day Saturday, March 23 and Monday, March 25 lending a hand at Rainbow PUSH, including working in the bookstore, speaking with visitors, and giving advice to Rainbow PUSH about their broadcast studio and expanding their choir.

Even though Smollett’s breathing easier today, he could still face federal charges related to the January 29 incident.  Law enforcement officials tell ABC News that the FBI and U.S. Postal Inspection Service are continuing their probe into whether Smollett played a role in sending a threatening message to himself prior to the allegedly staged attack.  The federal investigation, which was originally confirmed by ABC News February 20, is separate from the state charges that were dismissed Tuesday, meaning that decision has no legal impact on the federal probe.

Smollett was indicted on 16 counts of disorderly conduct and filing a false report after he claimed that he had been the victim of a January 29 racially-motivated attack.  Investigators, who objected to the prosecutor’s decision Tuesday, determined that Smollett had staged the attack with the help of Nigerian brothers Abimbola and Olabinjo Osundairo, who themselves told as much to investigators and provided them with evidence, including a check for $3,500 Smollett allegedly wrote them as payment.

A statement late Tuesday on behalf of Gloria Schmidt, the attorney who represented the Osundairo brothers, declared, in part, that the brothers “were fully prepared to testify in any criminal proceeding in the Jussie Smollett case.”  The statement also says that following the decision to drop the charges against Smollett, Schmidt “no longer represents the Osundairo brothers as trial witnesses in the criminal matter.”