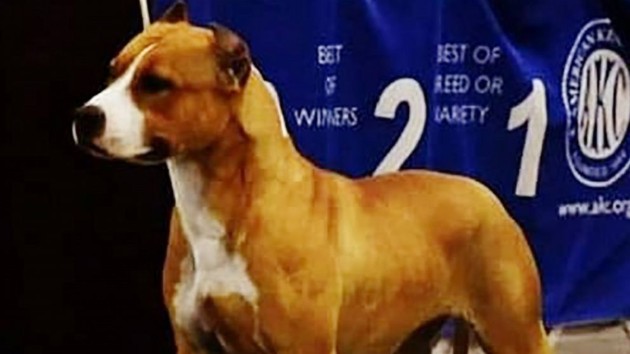 (ATLANTA) — The prize-winning show dog that disappeared in one of the world’s busiest airports for three days after being checked in for a flight has been found.Gale, a pure-bred American Staffordshire terrier whose owners live in Amsterdam, has been found and reunited with her family, the Hartsfield–Jackson Atlanta International Airport announced in a tweet Tuesday afternoon. The pup was being shown in the United States by her handlers and had one final event in Louisville, Kentucky, on Saturday before flying home. It was not immediately clear where she was found.The handlers brought Gale and another dog to the Atlanta International airport, where they checked in for their KLM Royal Dutch Airlines flight and went through security. Not long after the handlers boarded the Amsterdam-bound plane in Atlanta on Saturday afternoon, they were informed that Gale’s kennel was found empty when crews went to load her crate onto the aircraft. The handlers immediately called her owners.”Me and my wife completely panicked,” Gale’s owner, Floris Van Essen, told ABC News in a telephone interview from the Netherlands’ capital on Monday. “We were out of our minds. You can imagine it’s horrific to hear that a dog is gone and nobody knows where she is.”Van Essen said they’ve been in touch with the airport, the airline as well as the baggage handler, but being thousands of miles away and in different time zones “isn’t helping.””There’s a sense of hopelessness and powerlessness because there’s nothing you can do,” he added. Authorities and airport officials, including wildlife biologists on staff, have been trying to track down the dog ever since. Gale was last spotted Monday morning around 3:30 a.m. local time.”The dog somehow got out of the crate and is now running around the airfield,” Andrew Gobeil, a spokesperson for Hartsfield-Jackson International Airport, told ABC News in an interview Monday. “We have about 4,600 acres of field out there, from the airfield and from the woods area. So we’re looking throughout the entire airport.””We’re optimistic that we’ll find Gale,” Gobeil added. “We understand how important the dog is to the family structure when we want to make sure that we get Gale home safely.”When asked for comment, a spokesperson for KLM Royal Dutch Airlines told ABC News, “A dog broke out of its cage as it was being loaded into the cargo of KL622 on March 23. The dog’s owner has been notified. KLM expresses its sincerest regrets and is actively working with the Atlanta Airport to search for the dog.”Gale’s owners described the dog as “friendly” and “loving,” but said she is likely scared and skittish in an unknown area.”We’re really missing a family member,” Van Essen told ABC News. “We don’t have any children, the dogs are our children. Her brother lives here, her mother lives here, and we really want her back home safe.”