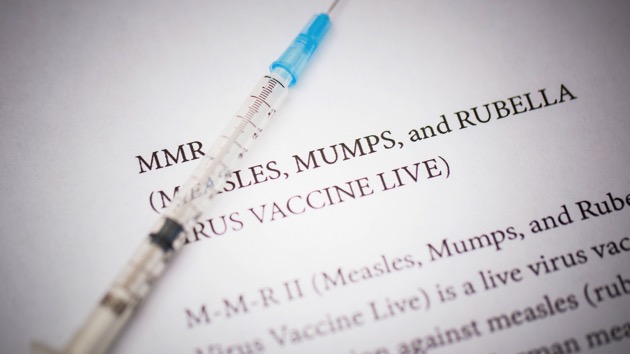 (NEW YORK) — A county in New York has declared a state of emergency after more than 100 people have been diagnosed with measles.Rockland County officials announced that starting at 12 a.m. on Wednesday, anyone under 18 who has not yet been vaccinated will be barred from public places until they receive the MMR vaccine or until the emergency declaration expires in 30 days. It’s unclear how the ban on public places will be enforced.Health officials have confirmed 151 reported cases of measles in Rockland County, ABC New York station WABC reported.Measles outbreaks in the state of New York began in October and have gone on longer and infected more people than any other current outbreak in the country, according to Kaiser Health News. Through the first week of March, 275 cases had been confirmed statewide, but that number has likely risen since.Much of the measles cases in New York have been concentrated among children of Orthodox Jewish families, many of whom attend religious schools where the vaccination rates are below 95 percent, which is the threshold considered necessary to maintain immunity, according to Kaiser Health News.The measles vaccination is 97 percent effective, according to health officials. High-risk groups include pregnant women, children under 6 months and those who are immunocompromised or immunosuppressed.Before the vaccine program began in the 1960s in the U.S., four million people were infected with measles every year, resulting in about 50,000 hospitalizations and 500 deaths annually, according to Kaiser Health News.In 2018, 349 individual cases of measles were confirmed in 26 states, according to the Centers for Disease Control and Prevention. So far in 2019, 314 cases of measles have been confirmed in 15 states.Measles cases have increased in recent years in part because of fears fanned by anti-vaccine activists, according to Kaiser Health News. Copyright © 2019, ABC Radio. All rights reserved.