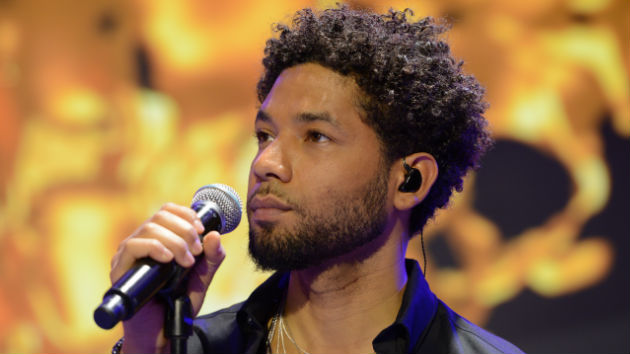 (CHICAGO) — At a press conference on Tuesday morning, Jussie Smollett spoke out for the first time since being exonerated of felony charges related to his claim that he was the victim of a racially-motivated attack in Chicago in January.

After his lawyer Patricia Brown Holmes spoke to the press, Smollett delivered his own prepared statement.

“My family, friends, the incredible people of Chicago, and all over the country and the world who have prayed for me and supported me, who have show me so much love– no one will ever know how much that have meant to me and I will be forever grateful,” he began.

“I want you to know that not for a moment was it in vain. I have been truthful and consistent on every single level since day one,” he continued. “I would not be my mother’s son if I was capable of one drop of what I’ve been accused of. This has been an incredibly difficult time and, honestly, one of the worst of my entire life.”

But I am a man of faith and I am a man that has knowledge of my history and I would not bring my family, our lives, or the movement through a fire like this. I just wouldn’t,” he noted.

Smollett then concluded his statement by thanking his legal counsel and the state of Illinois for “attempting to do what’s right.” He also vowed to continue to fight for justice for marginalized people.

Smollet’s remarks followed an emergency court hearing in Chicago, during which prosecutors told a judge they were dismissing the 16 charges of disorderly conduct and filing a false police report against the 36-year-old actor.

While it was not immediately clear what prompted prosecutors to drop the charges against Smollett, a spokesperson for the Cook County State Attorney’s Office noted that the actor will forfeit a $10,000 bond.

The spokesperson added that there was no plea deal, but rather an “agreement,” and that no community service will be required of Smollett.

“After reviewing all of the facts and circumstances of the case, including Mr. Smollet’s volunteer service in the community and agreement to forfeit his bond to the City of Chicago, we believe this outcome is a just disposition and appropriate resolution to this case,” said the spokesperson.

A previously noted, Smollett told police that on Jan. 29, he was walking on a street near his Chicago apartment around 2 a.m. when he was attacked by two men who allegedly shouted racist and homophobic slurs before hitting him, pouring “an unknown chemical substance” on him — possibly bleach — and wrapping a rope around his neck.

In a statement, Smollett’s family reiterated the actor’s innocence.

“Our son and brother is an innocent man whose name and character has been unjustly smeared,” read the statement. “Jussie is a son, a brother, a partner, a champion for human rights, and a genuine soul who would never be capable of what he was falsely accused of. He was the victim of an assault and then falsely blamed for his own attack. This morning truth has prevailed and he has been vindicated.”

It continued, “The painful incidents we’ve witnessed him endure over the past 7 weeks have been heartbreaking and unjust to say the least. While many were quick to rush to judgement before hearing the actual truth, we are grateful that the truth about Jussie has come to light.”

It concluded, “We look forward to bringing the real perpetrators to justice. We thank God and our village for standing by us during this trying time.”

FOX – which produces Empire – is now a part of Disney, ABC’s parent company.