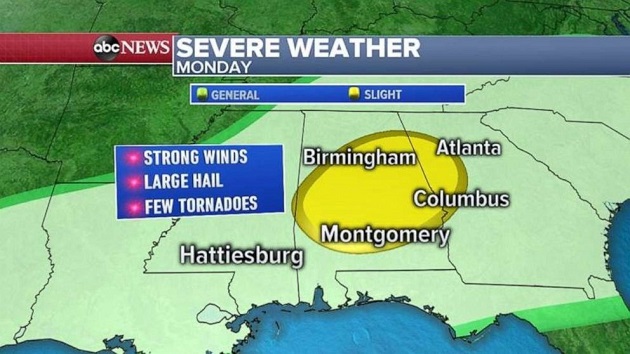 (NEW YORK) — Almost 90 reports of damaging storms were recorded over the weekend from Texas to Illinois, including a tornado near St. Louis and golf ball-sized hail that covered the ground near the Dallas-Fort Worth metro area.That storm system is heading east Monday and expected to deliver more severe weather to the Deep South and Southeast. Hail, damaging winds and isolated tornadoes remain the biggest threats.Melting snow in the upper Midwest is forcing rivers higher, but at least these areas aren’t expecting significant rainfall over the next few days.Flood warnings remain in effect for much of the Plains and upper Midwest as many rivers are again at or near record levels.Copyright © 2019, ABC Radio. All rights reserved.

Shawn Johnson pregnant with baby No. 2 with husband Andrew East
Trump isolated during final days as Senate trial looms
Blizzard warning issued for Midwest as storm moves into Northeast
As New York dumps Trump, a Trump exodus to Florida is underway
Sarah Jessica Parker on replacing Kim Cattrall in ‘Sex and the City’ revival, “It’s not quite as black and white as that”
Trump makes history as 1st president to be impeached a 2nd time