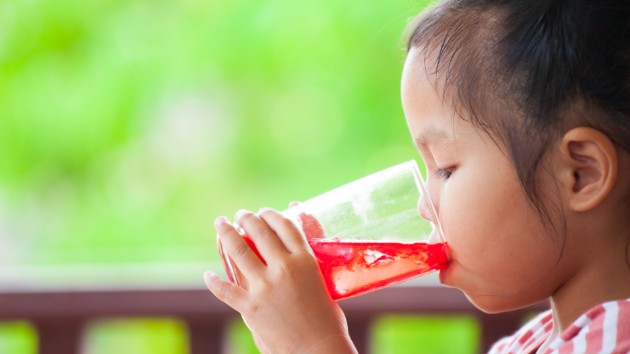 (NEW YORK) — Two of the nation’s most prominent health organizations issued a joint policy statement on Monday endorsing widespread public health regulations to help reduce the amount of sugary drinks that kids consume.The statement, issued by the American Academy of Pediatrics (AAP) and American Heart Association (AHA), will be published in the April issue of Pediatrics. It calls for additional taxes across the country on sugary beverages and limits on marketing of these drinks to children, as well as making drinks like water and milk the default beverages on children’s menu and ensuring access to healthy foods through federal nutrition assistance programs. “As a nation we have to say ‘no’ to the onslaught of marketing of sugary drinks to our children,” said Rachel K. Johnson, professor emeritus of nutrition at the University of Vermont and former chair of the AHA’s nutrition committee, in a statement. “We know what works to protect kids’ health and it’s time we put effective policies in place that bring down rates of sugary drink consumption just like we’ve done with tobacco.”

Why are sugary drinks bad?Childhood obesity rates have more than tripled since the 1970s, according to the Centers for Disease Control and Prevention, and sugary drinks are one of the many factors that have contributed to this rise. Other factors include a lack of physical activity, poor sleep routines, and the overall consumption of higher-calorie, low-nutrition foods.Sugary beverages are any drinks that contain added sugar. That includes not only most sodas, but fruit drinks, sports drinks, energy drinks, sweetened waters and coffee and tea beverages. There are also many different names for added sugar that might not immediately be apparent but show up on food labels, such as corn syrup, sucrose, and dextrose.Juices can also be made with added sugars on top of the natural sugars already present in the fruits. They should not be given to kids under a year old and given in limited quantities to toddlers, according to the AAP. Instead of juice, consider eating whole fruits for their maximum nutritional value with fiber.“For children, the biggest source of added sugars often is not what they eat, it’s what they drink,” Dr. Natalie D. Muth, a pediatrician and lead author of the policy statement, told ABC News.Muth said that on average, children consume over 30 gallons of sugary drinks each year — that’s a bathtub full of sugar — and that 17 percent of kids are getting their daily recommended amount of calories from sugary drinks rather than nutrient-dense foods.“As a pediatrician, I am concerned that these sweetened drinks pose real — and preventable — risks to our children’s health, including tooth decay, diabetes, obesity and heart disease,” Muth said.In a statement from the American Beverage Association (ABA), the trade group that represents the large non-alcoholic beverage companies, a spokesman told ABC News that “while soda consumption has declined by a third, the obesity rates have increased by a quarter, so if obesity was solely related to soda, it should’ve also gone down if they were directly correlated.”

Will these recommendations make a difference?One of the AHA and AAP’s strongest recommendations is to introduce taxes on drinks with high sugar content, a move that has already shown success in several cities across the U.S. and other countries.Berkeley, California, for example, was the first U.S. city to pass a tax on sugary drinks, which went into effect in 2015. In the two years after the tax went into effect, a study found that consumption of sugary drinks fell by 52 percent while water consumption rose by 29 percent. By comparison, there were no significant changes in sugary beverage consumption in San Francisco or Oakland, the two cities closest to Berkeley.In other areas of public health, such as alcohol abuse and cigarette smoking, the implementation of higher taxes has also led to reductions in their use.Muth said that the taxes would, in part, go back to the communities being taxed to help improve health. In Philadelphia, for example, she said that the money generated from a soda tax goes to pre-K programs in neighborhoods where people are most likely to buy sugary drinks. Incidentally, these neighborhoods also tend to be ones with lower socioeconomic status, which also tend to be the ones disproportionately targeted in ads for unhealthy foods and drinks.In their statement, the ABA spokesman said that instead of additional taxes and regulations, “a better way to help reduce the amount of sugar consumers get from beverages…includes putting parents in the driver’s seat to decide what’s best for their children.”“We are supporting parents who want less sugar in their kids’ diets by creating more drinks than ever before with less or no sugar, as well as smaller portion sizes, and by backing efforts to make water, milk or 100 percent juice the default beverages restaurants serve with children’s meals,” the spokesman continued, adding that it is working to reduce beverage calories consumed by 20 percent by 2025.The guidelines released Monday are not waiting for the future, though. The AHA and AAP want parents to talk to their kids about healthy drink options and encourage them to drink only milk and water without drinks high in sugar as part of their diets. It’s important to teach kids how to read labels so that they can take initiative with their health.

What can parents do?Muth recommended three ways parents can help:· Starting at a young age, make water and milk the only available drinks for your kids. Eliminate sugary drinks at home, if possible, and give kids a fun, refillable water bottle that they can carry with them wherever they go. Parents should be role models by not consuming sugary drinks themselves.· Teach kids that water and milk are the norm, even when going out to eat.· Starting at around 7 or 8 years old, kids can start to recognize marketing tactics. Parents should talk to their children about these strategies that companies use to make them buy more drinks.