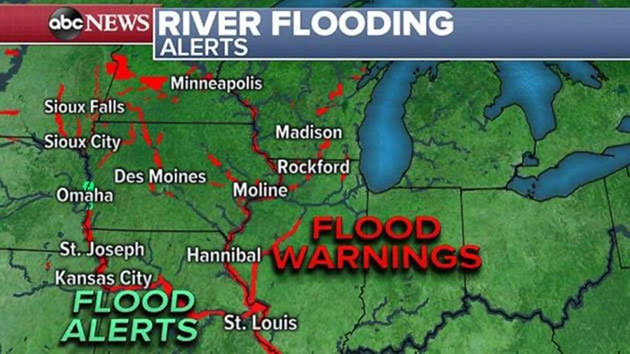 (NEW YORK) — A storm over the central Plains is expected to move eastward through the day Sunday, bringing the next round of severe weather to parts of the Deep South.The storm currently is bringing some bands of heavier rain across parts of Kansas and Nebraska, while a couple of thunderstorms are forming across Oklahoma, Arkansas and southern Missouri.The storm brought severe weather to parts of Oklahoma on Saturday night, where accumulating hail was reported in and around the Oklahoma City metropolitan region. Hail almost the size of golf balls was reported in Oklahoma County, which includes Oklahoma City.Strong thunderstorms with heavy rain and gusty wind will fire up throughout the day across parts of the Midwest, before moving into the Tennessee Valley by Sunday night.As the cold front associated with the storm taps into moisture coming from the Gulf of Mexico, severe storms will develop during the afternoon and early evening hours in parts of the Deep South.There is a slight risk for severe weather Sunday from northeast Texas to southern Missouri, including Dallas and Little Rock, Arkansas.In the slight-risk region, there is a chance for some damaging winds and large hail. Although this threat does not look conducive to tornadoes, a brief tornado or two cannot be ruled out.Some of these storms will fire up from Louisiana to Kentucky by early Monday morning, and could be strong over parts of Mississippi and Alabama.River flooding continues to be a threatThis storm is also bringing some precipitation to parts of the Midwest that are still dealing with river flooding due to snow melt and ice jams.The Mississippi River at St. Paul, Minnesota, will rise into major flood stage late Sunday or early Monday and will remain in that state through the end of the week. However, the main impacts from this river flooding are likely going to be park and road flooding. Additionally, some bridges along the Mississippi River could be affected by high water.Moderate to major river flooding is still ongoing across parts of Kansas and Missouri. However, the Missouri River is now receding in St. Joseph, Missouri; Atchison, Kansas; and Leavenworth, Kansas. The Missouri River is cresting in Parkville, Missouri; Kansas City; Missouri; and Sibley, Missouri, and will begin receding late Sunday.New Pacific storm moves inIn the western U.S., one storm will quickly move through the northern Rockies and southern Cascades Sunday, as a new, more-potent storm will approach the West Coast by Monday morning.This next storm will bring heavy rain to much of Northern California by Monday morning and eventually bring mountain snow to parts of the Sierra Nevadas.However, high pressure building over the central U.S. will initially prevent the storm’s impacts from moving inland. Locally, 1 to 2 inches of rain are possible along the coasts of Northern California and Oregon. As much as 1 to 2 feet of mountain snow is possible in some of the Sierra Nevada range. This could cause significant travel impacts in the mountain passes of Northern California on Monday and Tuesday.Another Pacific storm will move toward the West Coast later in the week. After about a week or so of relatively quiet weather, it appears that the atmosphere is getting ready once again to turn active as we head toward the end of March and beginning of April. Copyright © 2019, ABC Radio. All rights reserved.