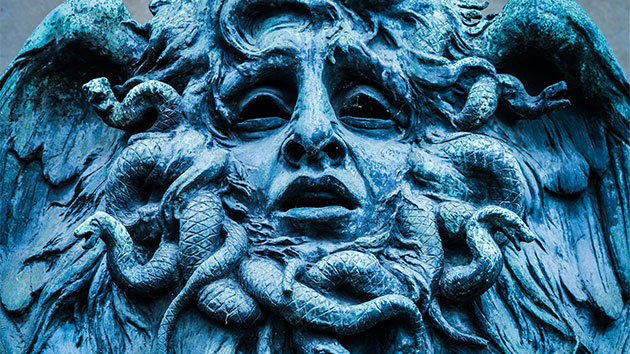 (NEW YORK) —  If you’ve read up on Greek mythology, then you might remember that Medusa, with her venomous snake hair and ability to turn her enemies to stone at a glance, was killed by the swift sword of Perseus.

But researchers at the Kyoto University of Science have discovered a way in which she lives on: through a giant virus that lives in hot springs and turns its hosts into “stone.”

The Medusavirus — real name Medusaviridae — is the first of its kind to be discovered in such a hot environment, where temperatures reach 110 degrees.

Along with the virus, which has over 2,000 spikes emanating from its surface, the scientists found evidence that the Medusavirus’ natural host “from ancient times” is an amoeba called Acanthamoeba castellanii. When the amoeba becomes infected, it loses water and hardens in a process called encystment — similar to turning its prey into stone, on a microbiological level at least.

The scientists do not believe humans can become infected by the Medusavirus.

The virus represents a new lineage belonging to a family of nucleocytoplasmic large DNA viruses, all of which contain double-stranded DNA just like humans.

What’s unique about the virus is that, in their study, the scientists found that it has histones, or molecules that are involved in the replication and organization of DNA, “similar to the way one would organize a garden hose around a reel,” Todd Ellerin, director of infectious diseases and vice chair of the Department of Medicine at South Shore Health in Weymouth, Massachusetts, told ABC News.

They also found that there was much overlap between the DNA of the virus and the amoeba, suggesting that the two evolved together, passing DNA back and forth over centuries.

Because of their many unique features, scientists believe these viruses are connected to major transitions in evolution, including DNA replication, a process critical to human life itself. As such, the discovery of this virus is significant in research on evolution.

Ellerin said, “It has a complexity that may help shed light on ancestral origins which could ultimately lead to insights that pose more questions than answers.”

Ashley Knight-Greenfield, MD, is a diagnostic radiology resident and member of the ABC News Medical Unit.

Larry King remembered by celebrities, politicians: ‘A newsman who interviewed the newsmakers’
Maine shifts some vaccine doses away from CVS and Walgreens
Pastor says addressing resistance to Biden administration is part of the job
John Krasinski, Dan Levy, Regina King are the first ‘SNL’ hosts of 2021
Disney moves ‘The King’s Man’, ‘Bob’s Burgers’ film, as COVID-19 shut-downs continue
“I was just trying to keep warm!” Bernie Sanders laughs on ‘Late Night’ about his meme-ready picture