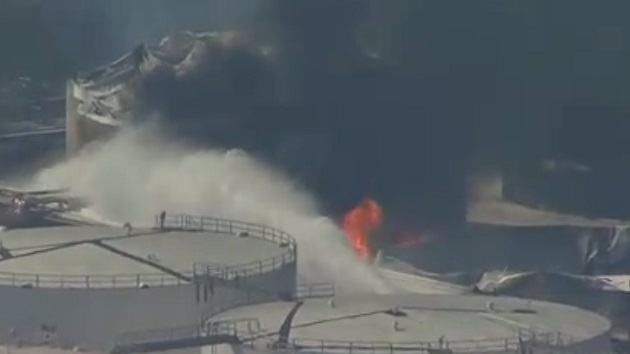 (DEER PARK, Texas) — Texas has filed a lawsuit against a company where petrochemicals burned for days and sent thick, black clouds of smoke wafting over the Houston area.Attorney General Ken Paxton announced the environmental lawsuit against Intercontinental Terminals Company on Friday in order to seek “injunctive relief and civil penalties” in connection with the fire. The fire, which began last weekend, briefly reignited at the same time Paxton was announcing the suit.The company is involved in the production of gasoline and the fire released multiple chemicals in the air, including benzene, according to the attorney general. The Environmental Protection Agency said Friday morning there had been no detection of benzene in the air as of Thursday, however, it’s unclear if the reignition changed that.”The state of Texas works hard to maintain good air quality and will hold ITC accountable for the damage it has done to our environment,” Paxton said in a statement. “ITC has a history of environmental violations, and this latest incident is especially disturbing and frightening. No company can be allowed to disrupt lives and put public health and safety at risk.”Even brief exposure to benzene can cause fatigue, dizziness and headaches.The EPA said Thursday it had not detected any issues with public drinking water from either the chemicals in the fire or the firefighting foam used to fight it.The fire, which began Sunday and was largely put out by Wednesday, caused a number of disruptions to the public. A shelter-in-place order in Deer Park was lifted Thursday morning, but Deer Park Independent School District and La Porte Independent School District both closed schools on Monday, Wednesday, Thursday and Friday. The U.S. Coast Guard also closed the Houston Ship Channel for a period of time on Friday.”ITC cares. We care a lot,” a teary-eyed Alice Richardson, Intercontinental Terminal Company spokesperson, said Thursday. “We have been good stewards, we’ve been good neighbors. … We will fix it and we will make this right.”The federal Chemical Safety Board has also opened an investigation into the fire.”Due to the dynamic, ongoing investigation of this incident, only air quality violations have been cited in the state of Texas lawsuit against ICT, LLC,” Texas Commission on Environmental Quality Executive Director Toby Baker said in a statement. “Any additional violations, including surface water quality, will be referred to the Office of Attorney General for civil enforcement as part of this action.”Penalties could exceed $100,000, according to the lawsuit.ITC is located in Deer Park, Texas, about 20 miles east of downtown Houston.