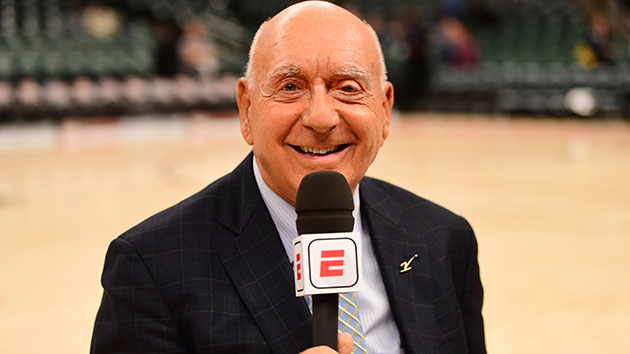 (NEW YORK) — NCAA college basketball analyst Dick Vitale has a message for the NCAA selection committee: find a way to get more mid-major programs in the tournament.”It’s great to see the David’s and the Goliath’s,” Vitale said in an exclusive conversation with ABC News before the NCAA Men’s Tournament began. The ESPN analyst discussed his advice for the NCAA, predictions, and recommended a recipe for family and friends watching the games.”I think it would be a lot better if we had more of what I call ‘David’s’ in the tournament. There are a lot of mid-major teams… that had great, great years that are not going to get in the tournament.” He points to Hofstra as an example.Teams from the Atlantic Coast Conference (ACC), Big Ten Conference (B1G), Big 12 Conference, Pac-12 Conference, and Southeastern Conference (SEC) are often recognized as Power Five schools. A mid-major team would come from a conference such as the Big Sky or MAAC. Hofstra, for example, is in the Colonial Conference.Vitale argues with 15th- and 16th-seeded teams in recent years knocking off Power Five programs, such as University of Maryland – Baltimore County defeating Virginia in 2018, it is time to open up the field.He believes mid-major teams who have better records than schools in Power Five conferences many times have a good of a chance of winning games and make the tournament even more exciting.Citing Loyola University Chicago’s 2018 Final Four appearance, Vitale says, “It makes people want to watch… fans who don’t even follow the tournament wanted Loyola Chicago last year.”Vitale warned against expanding the field beyond 68 teams, however, saying the 36 at-large bids are acceptable for the men’s tournament, but having only a handful of spots being granted to mid-majors is “just not fair.”As for who Vitale thinks will win the tournament, he is betting against the mid-major teams in this year’s March Madness:”If Duke is healthy, and Zion Williamson is ready and all their players… they are the team to beat.”Copyright © 2019, ABC Radio. All rights reserved.