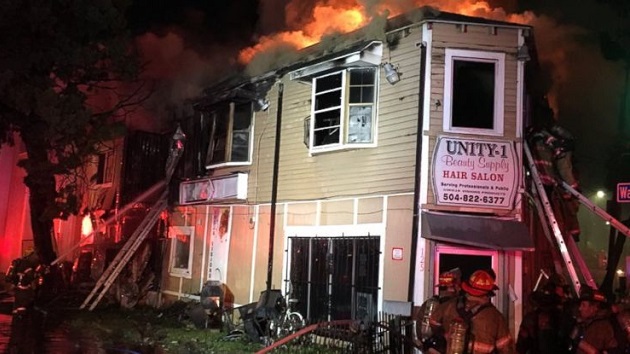 (NEW ORLEANS) — At least three people were killed in New Orleans on Wednesday night when a vehicle crashed into a beauty salon, engulfing the car and building in flames, authorities said.The crash occurred a short time after police began pursuing a vehicle that matched the description of one reported stolen. The car in question sped away and managed to evade police.Officers then saw billowing smoke in the distance, according to a statement from the New Orleans Police Department.A vehicle had smashed into a beauty salon at the intersection of Washington Avenue and South White Street, sparking the fire.Officers on scene were able to help a woman and two children escape from the burning structure. The three were transported to a local hospital and were listed in stable condition, police said. Crews from the New Orleans Fire Department pulled a woman from the second story of the building, but she died on the way to the hospital.Two individuals believed to have been inside the crashed vehicle also died, police said.Copyright © 2019, ABC Radio. All rights reserved.