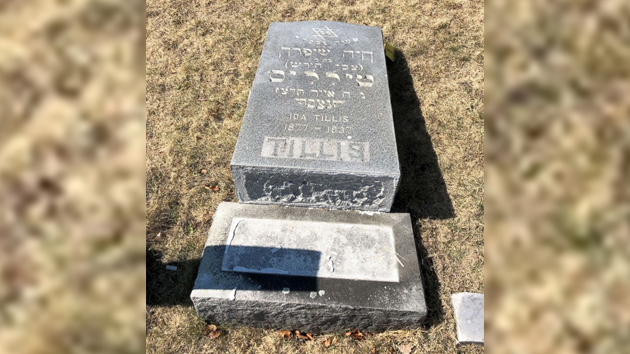 (BOSTON) — A hate crime investigation is underway after 59 headstones were defaced and two were knocked over at a Jewish cemetery in Massachusetts, according to local police.Officers responded to the Hebrew Cemetery in Fall River Sunday afternoon after a maintenance worker discovered gravestones damaged with swastikas and anti-Semitic messages, including “expel the Jew” and “Hitler was right,” according to police.It appeared the crime occurred Saturday or early Sunday morning, police said.A Bristol County Sheriff’s deputy walked the grounds of the cemetery Wednesday as relatives of those whose graves were desecrated documented the vandalism.Robert Trestan, regional director of the Anti-Defamation League (ADL) in New England, called the crime “an inexcusable act of antisemitic hatred in the place where we honor and remember the lives of our community members.””We are grateful for the priority that this apparent hate crime is being given by the Fall River Police Department,” Trestan said.The ADL said it’s offering a $1,500 reward for information leading to an arrest.Anyone with information is asked to call Major Crimes Division Sgt. Tom Mauretti and Detective Moses Pereira at 508-324-2796. Anonymous tips can be submitted to 508-672-TIPS.The United States had seen a decline in expression of anti-Semitism over the past several decades — until three to four years ago, when it started to rise, according to John Cohen, a former acting undersecretary at the Department of Homeland Security (DHS) and current ABC News contributor.Of the 1,749 victims of anti-religious hate crimes in 2017, 58.1 percent were victims of crimes motivated by the perpetrators’ anti-Jewish bias, according to statistics from the FBI.The rise in anti-Semitic expressions, according to Cohen, spans from harassment to vandalism to assault to murder to mass murder — and “seems to be coinciding with a rise in public expressions of white supremacy.”Social media plays a role, Cohen said, but he added, those who feel this way “feel empowered because they hear public officials using the language of their thought leaders and promoting the agenda of their organizations.””The themes promoted by white supremacist leaders and the language they use has now been promoted into mainstream political discourse,” Cohen said. “[When] racist, mentally unwell, violence-prone individuals hear our elected officials promoting the ideological themes of white supremacy and anti-Semitism, then that serves to empower those people to action.”Cohen said law enforcement is concerned anti-Semitic acts will get worse before they get better.Going forward, Cohen said, “The first step of dealing with the problem of anti-Semitism and extremist violence in this country is to acknowledge that the problem is actually here.””We’ve spent a lot of our political oxygen over the last three years focusing on the threat posed by foreign terrorist groups, the threat posed by immigrants,” Cohen said. “The primary threat today is from individuals who become inspired by what they see online and on their own go out and commit an attack.”