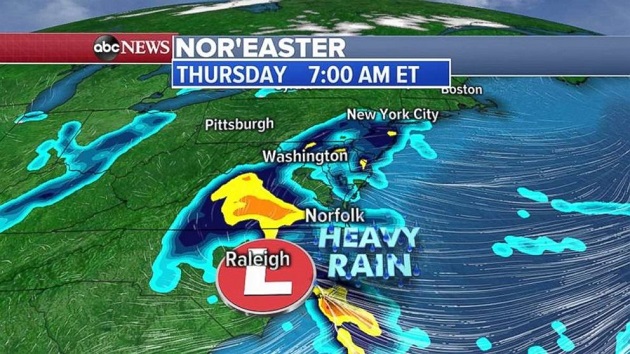 (NEW YORK) — A coastal storm is forming near the North Carolina coast and is expected to move up the coast Thursday into Friday. The nor’easter will bring heavy rain, damaging winds and heavy wet snow to the Northeast.Ahead of the storm, numerous states from Virginia to Vermont, are under flood and heavy snow alerts. Heavy rain will spread into Washington, D.C., and the Mid-Atlantic area Thursday morning, and then move into Philadelphia and New York City by the afternoon and evening.Some of the worst flooding is forecast for Washington, Baltimore and Philadelphia later Thursday.Rain will move into Boston later Thursday evening, but flooding is not expected. By Friday morning, the storm system will move into northern New England with heavy rain, wind and snow.Very strong winds are expected on the back side of the storm from Washington, D.C., to New York City. Gusts could exceed 50 mph. Rainfall totals will be the heaviest in the Mid-Atlantic, where locally 3 inches of rain could fall. This would lead to urban flooding in Washington, D.C., Baltimore and Philadelphia.Further inland, snow will be wet and heavy in western New York, Vermont, New Hampshire and Maine. Some areas could see up to a foot of heavy wet snow. Flooding concerns continue in PlainsRecord flooding is ongoing along the Missouri River, where the town of Craig, Missouri, has been submerged due to a levee failure Thursday. The entire town of Craig has been told to evacuate.Rivers and streams continue to rise downstream on the Missouri River in St. Joseph, Missouri, and Atchison, Kansas. Some of the worst flooding these cities have seen is expected this weekend. Further north, snow continues to melt in the Dakotas, Minnesota, Wisconsin, Iowa and Illinois, where rivers also continue to rise and major flooding is expected next week. Ice jams are also occurring in these areas.Flood warnings continue all along the central U.S. from the Dakotas to the Gulf Coast. More rain is expected in the central U.S. as western storms moves east.Thankfully, the latest computer models show the heaviest rain will move south of the flood zone. Nevertheless, half an inch to 1 inch of rain is possible for the Missouri and Mississippi River valleys this weekend and into early next week.Copyright © 2019, ABC Radio. All rights reserved.

Rumer Willis reveals she lost her virginity to a man that “took advantage” of her
Report: Dominic West in talks to play Prince Charles on final seasons of ‘The Crown’
Melissa Benoist is absolutely in love with being a mom
‘Dawson’s Creek’ is heading to Netflix — minus its iconic theme song
Election 2020 live updates: 14 days to go, showdown debate Thursday
Puerto Rican vote becomes essential as early voting begins in Florida