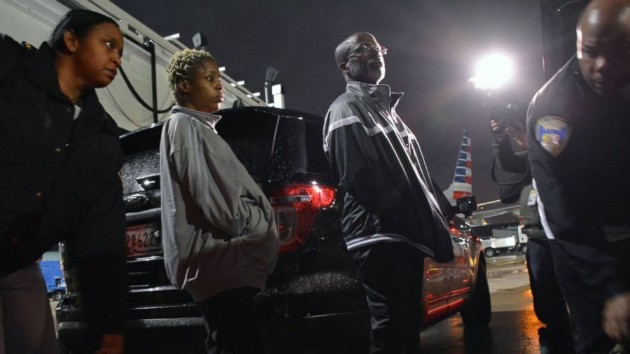 (BALTIMORE) — A father and daughter who allegedly fabricated a story of a panhandler stabbing his wife to death when she gave them money were extradited to Baltimore early Thursday to face murder charges. Keith and Valeria Smith were brought back to Maryland by the Baltimore Police Department’s Warrant Apprehension Task Force after being caught in Texas earlier this month while attempting to make a run for the Mexican border, authorities said. The father and daughter arrived at the Baltimore/Washington International Thurgood Marshall Airport shortly after midnight and were immediately driven to the Central Booking Intake Facility in Baltimore, police said. Baltimore police released video and photos of the pair being taken off the plane on the tarmac, put into handcuffs and driven away. It was not immediately clear when they will appear in court. They are both charged with first-degree murder in the Dec. 1 stabbing death of Keith Smith’s wife, Jacquelyn Smith, 54. The supects initially claimed Jacquelyn Smith was stabbed by one of two panhandlers she spotted while driving through East Baltimore. In interviews with homicide detectives and at a news conference shortly after the killing, the pair claimed Jacquelyn Smith was stabbed when she asked her husband to pull over so she could give $10 to a female panhandler who appeared to be holding a baby. Keith Smith told ABC News shortly after the killing that both panhandlers approached their car and the male panhandler stabbed his wife and snatched her chain as he and the woman were thanking her for the money. He said the woman panhandler reached into the car, grabbed his wife’s purse and ran. But on March 3, Michael Harrison, acting commissioner of the Baltimore Police Department, said the story told by Keith and Valeria Smith “was not true.” Baltimore Mayor Catherine Pugh slammed the suspects for using issues of homelessness as a ruse in an alleged attempt to cover up the killing. “These individuals took advantage of a situation, a city that is already dealing with its own problems,” Pugh said earlier this month. “We’re looking forward to this cruel act being brought to justice.” The father and daughter were arrested that day in Harlingen, Texas, which is near the Mexican border. Police said they suspect the pair was attempting to cross the border and disappear. Since his arrest, Keith Smith’s criminal history has come under increased scrutiny. He pleaded guilty in 2001 to robbing the same bank in Timonium, Maryland, three times in nine months, according to reports obtained by ABC News from the Baltimore County Police Department.