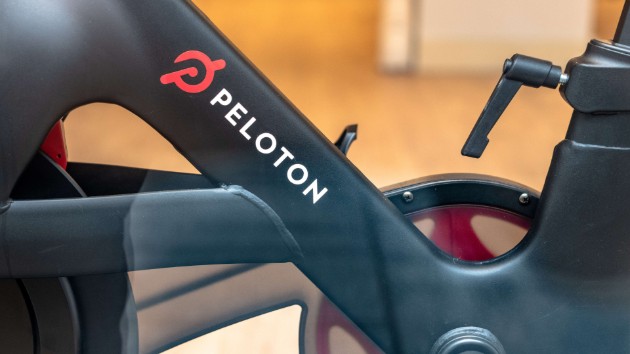 (NEW YORK) — Publishers representing songwriters behind hits by Rihanna, Justin Timberlake, Lady Gaga and others filed a $150 million lawsuit against Peloton on Tuesday, accusing the fitness technology firm of copyright infringement.The National Music Publishers’ Association, whose members include Downtown Music Publishing, Big Deal Music, Reservoir and Royalty Network, said Peloton used more than 1,000 songs without permission, leading to a “great deal” of lost income to songwriters, according to the lawsuit.“Unfortunately, instead of recognizing the integral role of songwriters to its company, Peloton has built its business by using their work without their permission or fair compensation for years,” the association said in a statement Tuesday. “It is frankly unimaginable that a company of this size and sophistication would think it could exploit music in this way without the proper licenses for this long,” the statement added, “and we look forward to getting music creators what they deserve.”The suit, filed in U.S. District Court for the Southern District of New York, alleges that Peloton released thousands of videos that included unlicensed music from various artists, including Bruno Mars, Katy Perry, Ariana Grande, Justin Bieber, Gwen Stefani and many more.The suit seeks more than $150 million in damages over infringements that the association said date as far back as 2014, the year Peloton launched its at-home workout streaming service. “Peloton is a textbook willful infringer,” the lawsuit claims. “Peloton’s fitness videos contain music from start to finish. Music not only can provide a tempo for a treadmill run or stationary bike ride; it is essential to creating the instructor’s desired atmosphere.”Peloton, which manufactures high-end exercise equipment and offers instructor-led online fitness classes, did not immediately respond to ABC News’ request for comment, but a company spokesperson told Variety that the firm was still evaluating the lawsuit. “We just received the complaint this morning, and we are evaluating it,” the spokesperson said. “Peloton has great respect for songwriters and artists. In fact, we have partnered with each of the major music publishers, record labels and performing rights organizations, and many leading independents.”Downtown Music Publishing, Pulse Music Publishing, ole, peermusic, Ultra Music, Big Deal Music, Reservoir, Round Hill, TRO Essex Music Group and The Royalty Network are all listed as plaintiffs in the suit.

Minority communities fighting back against disinformation ahead of election
Election 2020 live updates: Trump, Biden racing toward Election Day with more rallies
Boy, 3, dies at his birthday celebration after accidentally shooting himself with family member’s gun
Turbulent week of weather is ahead for much of the country
Mike Pence’s chief of staff Marc Short, other top aide test positive for COVID-19
Lawyer for Ivanka Trump, Jared Kushner threatens suit over ‘defamatory’ Lincoln Project billboards