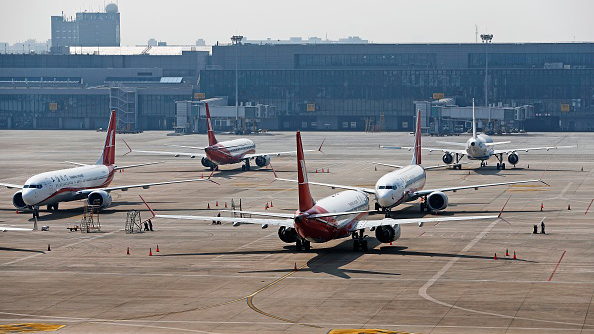 (WASHINGTON) — More details emerged on Wednesday about last year’s Boeing 737 MAX 8 crash in Indonesia, further exposing what experts say was a lack of pilot training on the plane’s suspect flight management system as the delay continued in releasing critical information about what might have caused a second deadly crash 11 days ago in Ethiopia.The pilots aboard the Lion Air plane that crashed in October struggled with their quick reference handbook, a checklist for abnormal events, and eventually ran out of time before crashing into the ocean minutes later, individuals with knowledge of the cockpit voice recorder told ABC News Chief Transportation Correspondent David Kerley.And the day before that crash, a similar situation unfolded on the same plane but was narrowly avoided with the help of an off-duty Lion Air pilot riding in the cockpit jump seat, according to a report from Bloomberg.The off-duty pilot told the captain and co-pilot how to disable the malfunctioning flight management system that was causing the plane to nosedive, according to Bloomberg. The next day, the same problem happened — but this time the pilots on board did not disable the system — and the aircraft crashed into the ocean off of Indonesia, killing all 189 on board.On March 10, five months later, Ethiopian Airlines Flight 302 crashed right after takeoff near the country’s capital of Addis Ababa. Though the flight data and cockpit voice recorders containing critical information were found one day later, families of victims have waited nearly two weeks without getting conclusive information about what was on the recorders or many details on similarities between the crashes.The black boxes were analyzed in France last week and returned to Ethiopia. Ethiopia’s top aviation official told the Wall Street Journal that a preliminary report, with data from the black boxes could be released in a week to eight days.As questions continued about similarities, nearly a full week had passed since the Boeing 737 MAX 8 was banned from flying worldwide. It’s predicted the plane will be grounded for weeks.And in the wake of the crashes and questions raised about the FAA’s certification of the plane, aviation officials from both the European Union and Canada have distanced themselves from the U.S. agency, which they used to trust and rely on in plane safety matters. Canada and the EU say they will conduct their own reviews of the software fix Boeing is making in the plane’s flight management system software before allowing the plane back in the skies, even if the FAA certifies the aircraft as safe.On Tuesday, Transportation Secretary Elaine Chao asked the department’s inspector general to conduct a formal audit of the FAA certification process that allowed the Boeing 737 MAX 8 aircraft to start flying.Sully Sullenberger, the now-retired pilot who famously and safely landed a plane with 155 passengers aboard in New York’s Hudson River, wrote about his concerns with the FAA in an op-ed on Monday.The FAA, long held as the gold standard for aviation safety, has damaged its credibility and cozied up to Boeing, Sullenberger wrote.Sullenberger also described an under-resourced FAA that doesn’t have the budget for diligent oversight.“There simply are not nearly enough FAA employees to do this important work in-house,” he wrote.Sullenberger also directed heavy criticism at Boeing, pointing out the long wait for a software fix — still not released — that was deemed necessary after the first Indonesia crash five months ago.“Boeing has focused on trying to protect its product and defend its stance, but the best way, indeed the only way, to really protect one’s brand or product is to protect the people who use it,” Sullenberger wrote. “We must not forget that the basis of business, what makes business possible, is trust.”Boeing maintained Tuesday that the FAA certified its flight control system and it met all regulatory requirements.