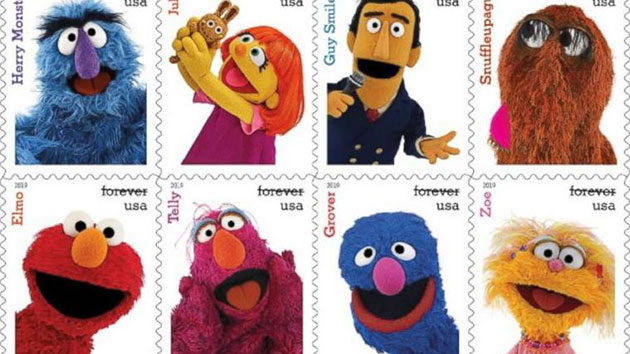 (WASHINGTON) — Sunny days, sweeping the clouds away, on their way to…the United States Post Service!The federal agency revealed this week that 16 iconic “Sesame Street” Muppets will be joining the ranks of new stamps being released in 2019. In a press release, USPS said the show is “one of the most influential and beloved children’s television shows.””For the last 50 years, it has provided educational programming and entertainment for generations of children throughout the country and around the world,” it continued.The stamp art will feature photographs of 16 Muppets from “Sesame Street”: Big Bird, Ernie, Bert, Cookie Monster, Rosita, The Count, Oscar the Grouch, Abby Cadabby, Herry Monster, Julia, Guy Smiley, Snuffleupagus, Elmo, Telly, Grover and Zoe. Art Director Derry Noyes designed the stamps.In addition to the “Sesame Street” fleet of stamps, coming later on this year there will also be “Tyrannosaurus Rex” as well as “Spooky Silhouettes” stamps.The “Nation’s T. rex,” the young adult depicted on two of the stamps, was discovered on federal land in Montana and is one of the most studied and important specimens ever found. Its remains will soon be on display at the Smithsonian Institution’s National Museum of Natural History in Washington, D.C., according to the U.S. Postal Service.The “Spooky Silhouettes” stamps will offer “fun, frightful scenes that symbolize this annual celebration,” the agency said.More details, including dates and locations for the first-day-of-issue ceremonies, will be released soon.