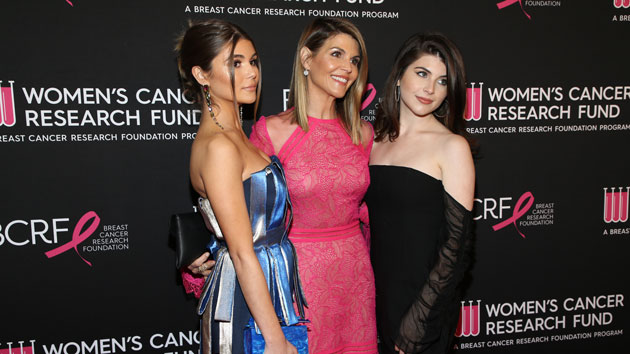 (NEW YORK) — The massive college admissions scam that snared 50 people in a federal indictment now appears to have cost one of the two famous actresses a major contract.Lori Loughlin, known to many as Aunt Becky from the television show “Full House,” was dropped from the Hallmark Channel where she has been featured in a number of movies in recent years, the company said in a statement.”We are saddened by the recent news surrounding the college admissions allegations,” the Hallmark Channel’s parent company Crown Media announced Thursday afternoon. “We are no longer working with Lori Loughlin and have stopped development of all productions that air on the Crown Media Family Network channels involving Lori Loughlin including Garage Sale Mysteries, an independent third party production.”No more of Loughlin’s work will air on the network, including shows that have already been filmed.Loughlin appeared in court Wednesday and was released on a $1 million secure bond. According to court documents, she and her husband, fashion designer Mossimo Giannulli, “agreed to pay bribes totaling $500,000 in exchange for having their two daughters designated as recruits to the USC crew team — despite the fact that they did not participate in crew — thereby facilitating their admission to USC.”Loughlin isn’t the only one in the family to lose work over the scandal. Sephora announced Thursday that they were dropping their partnership with Loughlin’s daughter, Olivia Jade, who is a popular YouTube vlogger and a freshman at the University of Southern California (USC).”After careful review of recent developments, we have made the decision to end the Sephora Collection partnership with Olivia Jade, effective immediately,” the makeup company announced in a statement.Those directly involved in the federal criminal case are not the only ones who are entering the legal fray over the college admissions scheme. Now a class-action lawsuit filed by two California college students in a Northern California federal court by two students at Stanford University, one of the eight elite colleges named in the lawsuit, all of which had associated individuals implicated in the bribery case.In the suit, students Erica Olsen and Kalea Woods claimed they both went through the legitimate and rigorous admissions process to Stanford and were “never informed that the process of admission was an unfair, rigged process, in which rich parents could buy their way into the university through bribery.”The suit also names as defendants the University of Southern California, UCLA, the University of San Diego, the University of Texas, Wake Forest University, Yale University and Georgetown University.The college admissions scam investigation said that people associated with various athletic teams at each of those schools were involved in getting students admission.Olsen, according to the lawsuit, applied to Yale University in 2017, submitting “stellar standardized test score, and a glowing profile that including being a talented athlete and dancer.”Olsen noted that she paid an application fee of approximately $80, according to the suit.”Had she known that the system at Yale University was warped and rigged by fraud, she would not have spent the money to apply to the school,” the lawsuit states. “She also did not receive what she paid for — a fair admissions consideration process.”Olsen contends she had been damaged by the admissions scandal because her degree from Stanford “is now not worth as much as it was before, because prospective employers may now question whether she was admitted to the university on her own merits, versus having parents who were willing to bribe school officials.” Copyright © 2019, ABC Radio. All rights reserved.

“The ‘Bridgerton’ Effect”: Searches for “embroidery,” “corsets” and other finery skyrocket amid Netflix show’s success
Andrew Yang addresses criticism over apartment remarks amid NYC mayor run
All armed National Guardsman on duty in DC vetted by FBI amid inauguration threats
Trump-Biden transition live updates: YouTube temporarily suspends Trump channel
Some GOP senators reverse objections to Electoral College certification after protesters storm Capitol
Amid COVID-19, politics and the US Capitol breach, how to cope with the stress of the news