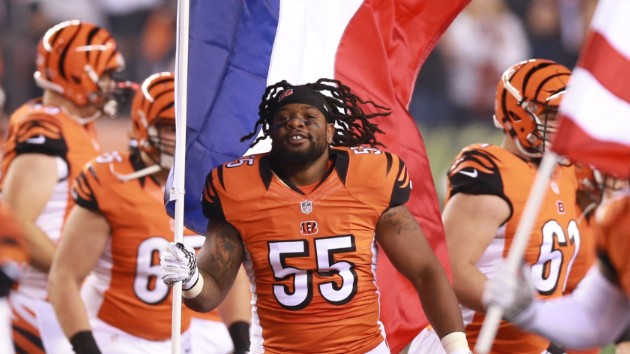 (CINCINNATI) — After seven seasons together, the Cincinnati Bengals are parting ways with linebacker Vontaze Burfict.The team announced on Monday it has terminated Burfict’s contract and released him to free agency.”As we continue to build our roster for the 2019 season, we felt it best to give both the team and Vontaze a fresh start,” Bengals head coach Zac Taylor said in a statement. “Vontaze has been a good player here — the team appreciates that, and I know a lot of fans appreciate that — but our focus is on the future. Our goal is to build a successful team for the upcoming season, and we felt that making this change now was best for everyone.”

Burfict, 28, has spent his entire NFL career with Cincinnati, signing with the team in 2012. In his seven seasons in the league, he’s recorded 684 tackles, 8.5 sacks and five interceptions.But Burfict’s career was also plagued with multiple suspensions, resulting in him missing several games. He was suspended by the NFL at the beginning of the 2016, 2017 and 2018 seasons for various violations.Copyright © 2019, ABC Radio. All rights reserved.