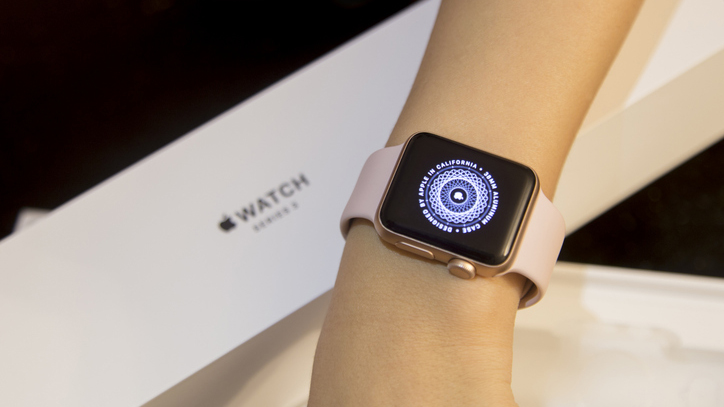 BY: DR. LEILA HAGHIGHAT(NEW YORK) — Last year, Ed Dentel’s Apple Watch informed him that he had an irregular heartbeat. It was right, and potentially saved his lifeNow scientists are revealing the research behind the innovative technology. Their study, funded by Apple, Inc., was presented at a conference of the American College of Cardiology.Stanford researchers have shown that the watches can detect atrial fibrillation, a dangerous heart rhythm that has the potential to cause stroke. Atrial fibrillation is the most common abnormal heart rhythm, and affects up to 6 million people in the U.S. Often, those affected have no symptoms, or experience mild palpitations in the chest. For some, the first sign is a debilitating stroke.In atrial fibrillation, the heart does not beat in a synchronized, regular way. Instead, it quivers. Blood can pool in the upper chambers of the heart, and because it is more stagnant than usual, a clot can form. If the clot dislodges from within the heart, it can go to the brain and cause a stroke. Up to 20 percent of strokes that involve inadequate blood flow to the brain are due to atrial fibrillation.The study on the Apple Watches enrolled over 400,000 adults who already owned an iPhone 5S or a newer version, along with an Apple Watch Series 1-3.Participants downloaded an app on their phones that used the watch’s light sensors to monitor their heart rate over about 8 months. If the app detected 5 successive irregular heartbeats, it set off an alarm, alerting patients to contact a doctor through the app. Those who did so were then sent a patch that they wore for about one week to record their heart’s electric activity with an electrocardiogram, or EKG. This could confirm whether there was truly atrial fibrillation present or not. After the patch was sent back and analyzed, a phone discussion was held with a doctor to review the results.Only 0.5 percent of people set off an alarm. The researchers concluded that, if people received an alarm notification, they were 84 percent likely to have atrial fibrillation. Based on survey data collected at end of study, over half of the people who received notifications eventually contacted a provider outside the study. About one-third started a new medication and were referred to a specialist for further care.“We as clinicians, the onus is on us to start understanding the technology that patients are coming to us with,” Dr. Marco Perez, a Stanford electrophysiologist and author of the study, said at a press conference.There was concern among cardiologists at the conference that the Apple Watch would have limited appeal for clinical use, considering the starting price at $279.The International Data Corporation (IDC), an independent agency, has estimated that Apple sold over 8 million watches in the last three months.The Stanford researchers are still looking into what other abnormal heart rhythms were detected beside atrial fibrillation, and are interested in studying whether the Apple Watch can contribute to the number of strokes prevented.While more research needs to be done before cardiologists can entirely rely on Apple Watches to detect atrial fibrillation, it is a potential warning system for those that have the watch.If you suspect you have an irregular heartbeat you should see your physician, who can recommend further testing.Dr. Leila Haghighat is an internal medicine resident from Yale New Haven Hospital who also works with the ABC News Medical Unit.

Biden to phase out federal use of private prisons as part of racial equity actions, officials say
Watch now: Action and joke-packed trailer for Disney’s animated ‘Raya and the Last Dragon’
Sen. Paul does not unequivocally say 2020 election wasn’t stolen
Families say more should have been done after 3 murders at New York City housing complex
As nursing homes get vaccine, assisted living centers are left ‘falling through the cracks,’ experts say
Licensed child-care workers in PA eligible for one-time $600 grant