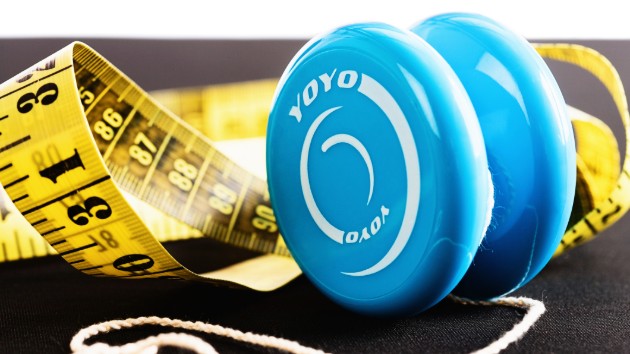 RapidEye/iStock(NEW YORK) — Nearly half of all Americans try losing weight each year. While some people succeed, many others will see their weight fluctuate, going down then back up again — and sometimes even repeating the cycle — in a pattern known as yo-yo dieting.
New research has found that women whose weight yo-yoed like this — losing 10 pounds then regaining it at any point in their life — were more likely to face heart risks than those whose weight remained stable. The study, from researchers at Columbia University Medical Center is slated to be presented at a meeting of the American Heart Association this week.
“The take-home message is that it’s possible that going up and down in weight might be worse than just remaining slightly overweight, but we don’t know that for sure quite yet,” Dr. Brooke Aggarwal, senior author of the study from Columbia University Medical Center, told ABC News.
For a long time now, fluctuations in weight have been linked to increased rates of heart disease. What’s unique to this study is its focus specifically on women and their diversity. Over half identified themselves as belonging to an ethnic minority group.

Aggarwal said that the reason yo-yo dieters seem to fare so poorly may be related to what’s known as the “repeated overshoot theory,” which suggests that every time a person regains weight, their cardiovascular risks increase to higher levels than they were before the person lost weight — such as their blood pressure, heart rate, insulin resistance and cholesterol.
Other researchers have shown that yo-yo dieting may also reduce muscle mass and increase body fat, especially around vital organs in the abdomen. Studies have shown that higher levels of fat in the abdomen pose an increased cardiovascular risk.
Aggarwal said that this study really highlights the importance of making exercise and a healthy diet a lifestyle. That means incorporating healthy foods into one’s diet consistently over time until they become the main component, rather than participating in a fad diet, which is often temporary. That said, if you choose to try a fad diet, consider whether it’s something you can really sustain before committing to it.
The study included 485 women in New York who were part of a nationwide study looking at cardiovascular health. The women were asked in a survey to report changes in their weight over their adult life. Over 70 percent of women reported yo-yo dieting at one point in their life, with the number of times it happened ranging between zero and 20.
Yo-yo dieters were 82 percent less likely to have optimal body weight and 65 percent less likely to have optimal cardiovascular health. Women who yo-yoed more tended to have poorer scores and the associations were stronger in women who had never been pregnant. The study did not ask women whether their weight loss was intentional and did not assess for eating disorders, which could influence their ability to maintain weight.
Copyright © 2019, ABC Radio. All rights reserved.