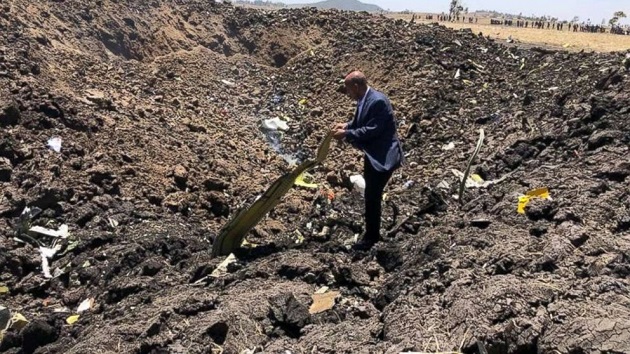 Ethiopian Airlines(LONDON) — A growing list of airline carriers around the world are grounding their fleets of Boeing 737 Max 8 aircraft in the wake of a crash of the same model that killed all 157 people on board.
A new Boeing 737 Max 8 operated by Ethiopian Airlines went down in clear weather on Sunday morning just minutes after taking off from Addis Ababa Bole International Airport in Ethiopia's capital. The American-made jet was headed to Nairobi, Kenya.
A total of 149 passengers and eight crew members were believed to be on board Flight 302, and there were no survivors, according to Ethiopian Airlines.
The cause of the crash is under investigation. The National Transportation Safety Board of the United States said it's sending a team of four to assist in the probe. The U.S. Federal Aviation Administration said it plans to join the NTSB in assisting Ethiopian authorities.

Ethiopian Airlines said two black boxes — the digital flight data recorder and the cockpit voice recorder — have been recovered from the wreckage.

The same type of plane crashed into the Java Sea minutes after takeoff from Indonesia on Oct. 29, killing all 189 people on board.
China's aviation regulator on Monday ordered all Chinese airlines to suspend operations of Boeing 737 Max 8 aircraft, which entered service in May 2017. Using those planes won't resume until "confirming the relevant measures to effectively ensure flight safety," the Civil Aviation Administration of China said in a statement.
Cayman Airways said it will ground its two Boeing 737 Max 8 planes "until more information is received."
"While the cause of this sad loss is undetermined at this time, we stand by our commitment to putting the safety of our passengers and crew first by maintaining complete and undoubtable safe operations," Cayman Airways President and CEO Fabian Whorms said in a statement Sunday night.
Ethiopian Airlines announced that it's also suspended its use of the model "until further notice."
"Although we don't yet know the cause of the accident, we had to decide to ground the particular fleet as extra safety precaution," the airline said in a statement early Monday.

Meanwhile, Indonesia's aviation regulator said it will "continue to supervise airlines that still operate" Boeing 737 Max 8 aircraft — something which has been carried out since the crash in October.

Thirty-five countries lost citizens in Sunday's deadly crash.
At least eight Americans were among those killed. The U.S. Embassy in Ethiopia said it is "working to determine their identities."
Ethiopian Prime Minister Abiy Ahmed declared Monday a national day of mourning.
The Boeing Company said it was "deeply saddened" by the crash.
"We extend our heartfelt sympathies to the families and loved ones of the passengers and crew on board and stand ready to support the Ethiopian Airlines team," the Chicago-based aircraft manufacturer said in a statement Sunday. "A Boeing technical team will be travelling to the crash site to provide technical assistance under the direction of the Ethiopia Accident Investigation Bureau and U.S. National Transportation Safety Board."