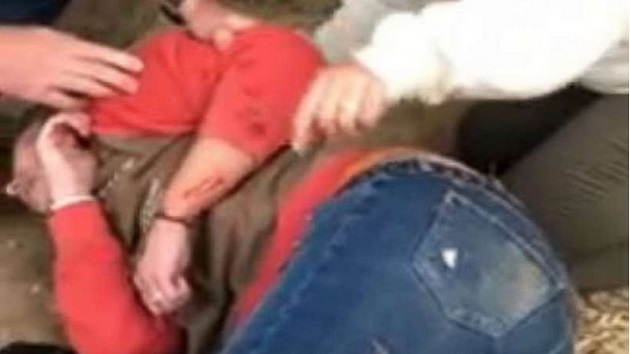 Adam Wilkerson(PHOENIX) — A woman suffered serious injuries to her arm after being attacked by a jaguar at Wildlife World Zoo, Aquarium and Safari Park, just outside Phoenix, on Saturday.
The woman was attempting to take a selfie when the animal reached out and swiped at her, according to the Rural Metro Fire Department.
The zoo said the woman crossed a barrier in an attempt to get the photo.
"We regret to inform that this evening, before closing there was an incident reported involving a guest, who crossed over the barrier to get a photo, according to eye witnesses," Wildlife World Zoo, Aquarium & Safari Park said in a statement. "The visitor sustained non-life threatening injuries to their arm from one of our female jaguars. At the request of the family, paramedics were called.
"At no time was the animal out of its enclosure," it added. "The incident is being fully investigated."
Video filmed by an eyewitness in the aftermath of the attack showed a severe gash on the woman's left arm.
This is the second time in a month the same jaguar has swiped at a guest, Wildlife World Zoo Director Mickey Ollson told Phoenix ABC affiliate KNXV.
The zoo said on Twitter the jaguar will not be euthanized.
"We can promise you nothing will happen to our jaguar," the zoo said. "She's a wild animal and there were proper barriers in place to keep our guests safe- not a wild animals (sic) fault when barriers are crossed. Still sending prayers to her and her family."
Jaguars are the largest cat found in the wild in North and South America. Adults range from about 120 to 200 pounds, with males a little larger than females. Wildlife World has both black and spotted jaguars.
Jaguars are exceptional hunters and can kill large mammals with their sharp claws and powerful bite. Last July, a jaguar escaped its enclosure at the Audubon Zoo in New Orleans during off hours and killed nine other animals, including three foxes, five alpacas and an emu. The animal was just reintroduced to its enclosure at the zoo last month.
Wildlife World is the largest zoo in Arizona.