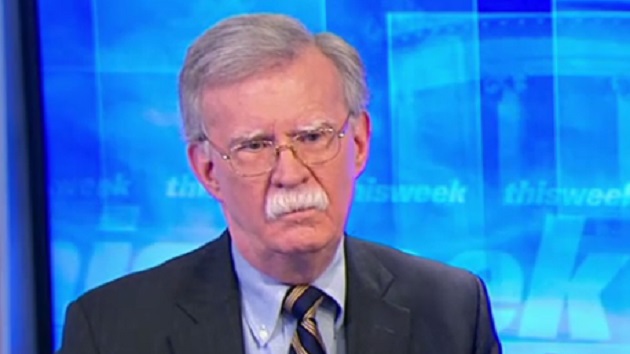 ABC News(CARACAS, Venezuela) — White House national security adviser John Bolton said Sunday that "momentum is on the side of" interim President Juan Guaido in Venezuela, and that President Nicolas Maduro "fears" that if he orders Guaido's arrest, "it would not be obeyed."
"I think momentum is on Guaido's side. Reports in the press that … the military hasn't shifted miss the point entirely," Bolton said in an interview with “This Week” Co-Anchor Martha Raddatz Sunday. "They have not sought to arrest Guaido and the National Assembly in the opposition, and I think one reason for that is that Maduro fears if he gave that order, it would not be obeyed."
The U.S., along with 50 other countries, have backed Venezuela’s self-declared interim president Juan Guaido, who’s leading the opposition movement.
"The fact is — and the media don’t know it because people don’t talk about this — there are countless conversations going on between members of the National Assembly and members of the military in Venezuela; talking about what might come, how they might move to support the opposition," Bolton said. "They’re not going to broadcast that."
Bolton tweeted Wednesday that President Donald Trump "has made it clear to Nicolas Maduro and those around him, 'all options are on the table.'" But Pentagon officials indicated in September that there was no active planning for U.S. military intervention.
In his first interview with an American television network in years, Maduro told ABC News Anchor and Chief National Affairs Correspondent Tom Llamas that phrases like "all options are open," are "a threat for war."
Also in that interview, Maduro said that he fears the people around Trump, including Bolton, who he called "an extremist and expert of the Cold War."
"I think these people surrounding President Trump and advising him on Venezuelan policies are bad. And I think that at one point, President Trump will have to say 'stop, stop, we have to see what happens with Venezuela,' and change his policy," Maduro said.
"Do you want Maduro to fear the advice you’re giving to the president?" Raddatz asked Bolton on "This Week."
"Let me just say I’m honored to be named by Nicolas Maduro. I add him to the list of other people who’ve criticized me over the years," Bolton said, adding that he doesn’t wish the president "any ill will."
"It’s not just Maduro though. It’s the entire regime. It’s a group of kleptocrats who have plundered Venezuela of its oil wealth, have impoverished the people."
"You’re pretty certain Maduro’s going to be out?" Raddatz pressed.
"I’m not certain of anything," Bolton said.
He added, "I think the overwhelming support of the population and the overwhelming support of the enlisted personnel in the military and the junior officers" is for Guaido. "We’ll see what happens."