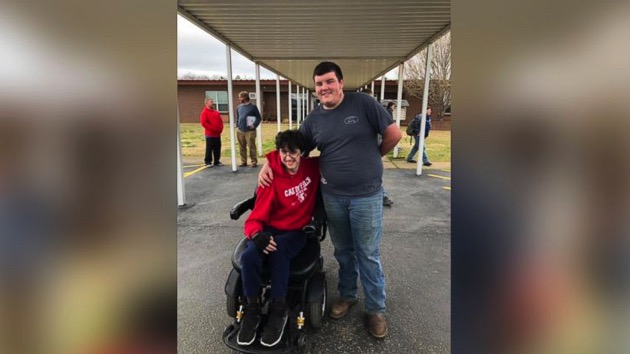 Caddo Hills School District/Facebook(NORMAN, Ark.) — One high school student's generosity and kindness toward a fellow classmate is warming hearts across the nation.
Tanner Wilson, a senior at Caddo Hills High School in the rural town of Norman, Ark., bought an electric wheelchair for his classmate and friend, Brandon Qualls. It took Wilson more than two years to save up money from his part-time job to afford one.
"He’s just been a really good friend and I wanted to do him a favor," Wilson told local television station KTHV in an interview last week. "I just felt like I needed to do it, and I wanted to do it."
For years, Qualls had been using a self-propelled wheelchair to get around.
"My arms would get really tired, and I would have to stop and take rests," Qualls told KTHV.
Wilson surprised Qualls with the new wheelchair during class on Feb. 26. A teacher helped decorate the chair with orange flames on the fenders and Qualls' last name written in orange flames on the back of the headrest. Orange is Qualls' favorite color.
"They came in and my face just blew up, crying everywhere," Qualls told KTHV. "Just like, 'Wow, can't believe he did that for me!'"
Wilson said seeing the smile on his friend's face made it "100 percent" worth it.
"There’s many people out here that have troubles and need a little bit of help," he told KTHV.
Caddo Hills School District shared a photo of the two friends on Facebook that day. The post had garnered nearly 3,000 likes and almost 2,000 shares by Wednesday.
"We would like to share some love," the school district wrote in the Feb. 26 post. "Today Tanner Wilson, Caddo Hill’s Senior, surprised his fellow classmate Brandon Qualls with a motorized wheelchair. We are so grateful for the heartfelt surprise from one Indian to another. Tanner has been saving for two years to show his appreciation and friendship for Brandon."
Copyright © 2019, ABC Radio. All rights reserved.