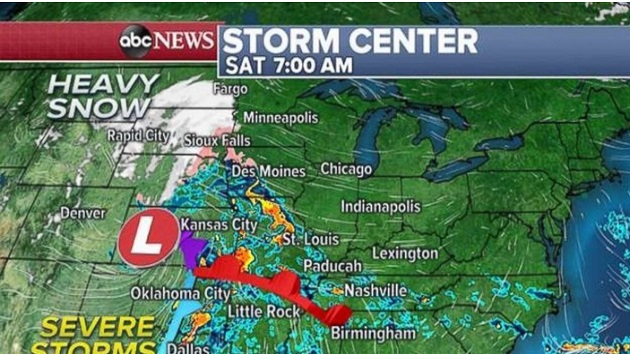 ABC News(OKLAHOMA CITY, Oklahoma) — A potent storm developing in the central U.S. will bring the next round of severe weather to parts of the South on Saturday. Much like last weekend’s deadly storms, the primary concern is the risk of severe weather, including possible tornadoes. Meanwhile, to the north, blizzard conditions are possible.
Storms had already produced wind gusts approaching 80 mph in western Texas early Saturday morning with at least 23 reports of damage.
A severe thunderstorm watch was issued for parts of Missouri, Arkansas, Oklahoma and Kansas through 10 a.m. local time and a severe thunderstorm watch was issued through 11 a.m. for southern Oklahoma and northern Texas, including the Dallas metropolitan area. These severe weather watches are just some of the many alerts, including wind advisories and winter weather alerts, across a good portion of the central U.S.
New winter weather advisories have been issued for parts of the Northeast as well.
Heavy snow will move through the Dakotas during the morning hours on Saturday and will reach into Minnesota and Iowa during the day. Snowfall rates will reach 1 to 2 per hour locally, with gusty winds.
Additionally, severe weather will quickly intensify and organize Saturday morning through parts of the South with rather robust cells forming mainly in Louisiana, Arkansas and Missouri. Strong damaging winds, hail and a possible tornado are all possible.
However, as the front moves into parts of Mississippi, Tennessee and Kentucky during the day, there is a possibility for tornadoes during the middle of the day and early afternoon. If tornadoes develop, some could be strong. The threat is highest in the enhanced risk region from western Alabama to southern Illinois.
Meanwhile, heavy snow will spread farther into the Upper Midwest Saturday night, including parts of Wisconsin. heavy rain will develop from Chicago to Cincinnati as the storm slides east. The severe weather threat in the South will diminish substantially during the Saturday evening hours.
On Sunday morning, precipitation will be moving toward the Northeast. It could initially start out as a burst of snow before sunrise with snowfall rates of 1 inch per hour from Minnesota to New England.
Warmer air should quickly move in and change the snow to rain across much of Northeast. Accumulations should remain pretty limited from New York to Boston. However, there could be a couple of spots inland from Hartford, Connecticut, to Springfield, Massachusetts, to Albany, New York, that have a decent chance of picking up 2 to 4 inches of snow. In some of the more rural and elevated parts of New England 6 inches could quickly accumulate Sunday. Meanwhile, snowfall totals in parts of Minnesota could exceed a foot of snow locally.
The storm is also pulling up warmer air from the tropics into parts of the southern U.S. Temperatures will briefly be at least 10 degrees above average ahead of the cold front Saturday in the South and then locally 10 to 20 degrees above average in parts of the Southeast on Sunday.
The brutal cold air does not make a strong return in the wake of this storm in the coming week. Another fairly potent storm, with another severe weather threat, looks to develop for the middle of the week and will likely bring a similar temperature set up to much of the central and eastern U.S.
All of this a sign that the atmosphere in the Northern Hemisphere is responding to more direct sunlight as we head toward the official start of spring.
Copyright © 2019, ABC Radio. All rights reserved.