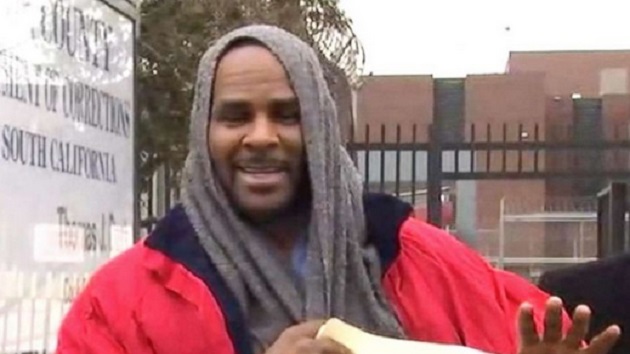 (CHICAGO) — Defiant R&B singer R. Kelly walked out of a Chicago jail for the second time in two weeks on Saturday after paying off the $161,000 in child support he owed his ex-wife.

Kelly walked out of the Cook County Jail just before noon wearing a red jacket over a grey hoodie, with the hood over his head. He briefly stood in front of cameras and spoke inaudibly while clutching a folder before leaving in a black van.

Kelly had been jailed since Wednesday after failing to make child support payments dating back eight months for his three children to his ex-wife, Andrea "Drea" Kelly.

Kelly's lawyer, Steve Greenberg, spoke to reporters outside of the jail after Kelly was released. He declined to comment on the specifics of the child support payment saying that the judge had issued a gag order. Earlier in the week, Kelly's publicist told reporters Kelly only had $60,000 to contribute because he could not work due to the criminal cases against him.

Greenberg said on Saturday that Kelly had been paying $20,000 a month until he couldn’t make any more payments.

Greenberg also defended his client, saying "Whatever the man does, he’s criticized. He sat down for an interview, he’s not hiding."

The "I Believe I Can Fly" singer was previously jailed on Feb. 22 after he was charged with 10 counts of aggravated criminal sex abuse and held on $1 million bond.

Kelly has pleaded not guilty to the charges.

Defendants must typically pay 10 percent of the bond to be released from custody, but Kelly's lawyer had said during the first bond hearing on the 10 criminal charges that the singer's finances were "a mess." He spent that weekend in jail until a friend, Valencia Love, paid the $100,000 on Feb. 25 and he was released.

Just prior to being taken into custody on Wednesday, the 52-year old singer taped an operatic interview with "CBS This Morning" co-host Gayle King, in which he yelled and cried, calling the allegations against him "not fair."

Kelly told King his ex-wife was lying when she said he abused her, asking, "How can I pay child support if my ex-wife is destroying my name and I can't work?"

He also brought up his previous sexual assault case, which ended in his acquittal in 2008.

Kelly also told King he had "zero" relationship with his three children but said that they love him.

Asked if Kelly regretted the interview, Greenberg told reporters he did not think so.

Kelly Ripa and Ryan Seacrest to give away $10,000 in prizes for virtual Halloween costume contest
Penn State DuBois hosting virtual event for those dealing with loss
DuBois School District back in school five days a week for in-person classes
Hilary Duff announces she is pregnant with her third child
Parents of Addicted Loved Ones: topics and speakers announced for meetings
Chelsea Handler offers to pay 50 Cent’s taxes if he retracts support for Trump