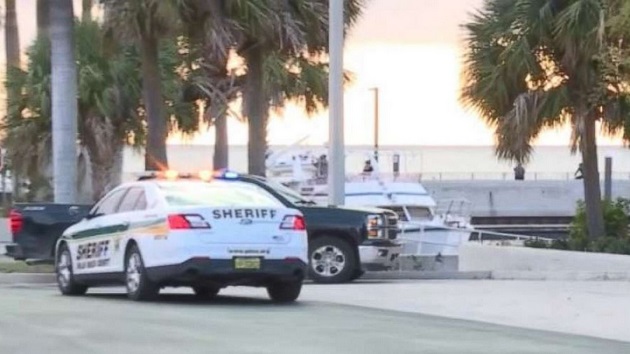 WPBF(PALM BEACH, Fla.) — Five people are dead after a small plane fell from the sky and plunged into Lake Okeechobee in southern Florida on Friday afternoon.
All five bodies were recovered from the fuselage of the airplane, according to the Palm Beach County Sheriff's Office.
"A twin-engine Piper aircraft went down in Lake Okeechobee while on approach to Pahokee Airport at approximately 3:30 p.m. today," the Federal Aviation Administration said in a statement. "The flight departed from Tampa International Airport. The FAA is investigating. However, the National Transportation Safety Board will be in charge of the investigation and will release updates."
The accident happened about 400 yards north of Pahokee Airport, which is located on the southeast shore of the large inland lake and about 200 miles from Tampa International Airport.
An initial report from the Palm Beach County Sheriff's Office said "one individual was observed swimming away from the airplane, however, has not been located." It turns out that eyewitness report was inaccurate.
"I seen it circling. It went around two times," witness Laura Lester told West Palm Beach ABC affiliate WPBF. "And it went up in that corner and it didn't come back."
The death investigation will be handled by the PBSO Violent Crimes Division, the sheriff's office said — standard procedure whether a crime is suspected or not.
Friday's accident took place not far from where a plane crashed into a condo building in Fort Lauderdale one week earlier. That accident, which was a single-engine Piper aircraft, was about an hour south of Pahokee Airport. The pilot of the aircraft was killed.
Copyright © 2019, ABC Radio. All rights reserved.