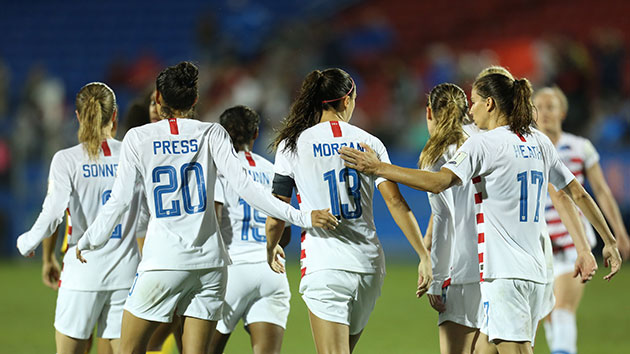 The scathing lawsuit, filed in California federal court on International Women's Day, comes after years of public battles from the USWNT for equal pay and conditions and three months before the team is scheduled to begin competition at the FIFA World Cup, where they will be returning as defending champions.

"Despite the fact that these female and male players are called upon to perform the same job responsibilities on their teams and participate in international competitions for their single common employer, the USSF, the female players have been consistently paid less money than their male counterparts," the suit says.

"This is true even though their performance has been superior to that of the male players – with the female players, in contrast to male players, becoming world champions."

The 28 members of the 2015 winning team are all named as plaintiffs, including stars Alex Morgan, Megan Rapinoe and Carli Lloyd, and the suit requests class action status to represent players who have been on the team since February of that year.

The suit seeks back pay including interest and benefits, damages, attorneys' fees and other relief.

"The pay for advancement through the rounds of the World Cup was so skewed that, in 2014, the USSF provided the MNT with performance bonuses totaling $5,375,000 for losing in the Round of 16, while, in 2015, the USSF provided the WNT with only $1,725,000 for winning the entire tournament," the lawsuit reads. "The WNT earned more than three times less than the MNT while performing demonstrably better."

The lawsuit cites not just pay, but also the denial of "at least equal playing, training, and travel conditions; equal promotion of their games; equal support and development for their games; and other terms and conditions of employment."

In 2015, athletes complained about playing conditions after Rapinoe tore her ACL during training on a grass field that was reportedly described as being in bad shape. U.S. Soccer then canceled a match in Honolulu as its turf was "not suitable."

That the women's team, but not the men's, was subjected to playing on turf fields was a regular issue between athletes and U.S. Soccer.

In 2017, the women's team reached an agreement with the USSF after filing a complaint with the United States Equal Employment Opportunity Commission over pay.

The agreement included direct and bonus pay increases and per diems equal to the men's team, according to ESPNW, as well as improved travel and financial support for pregnant or adopting players. It also included required improvements in National Women's Soccer League standards.

In February, the EEOC issued the soccer players a "right to sue," the new lawsuit indicates, which is required to sue for discrimination under federal law.

The USWNT is not the only women's team fighting for equal pay and conditions. The women's national hockey team has been on its own mission, following the soccer team and spurred by its victory at the 2018 Winter Olympics.

Similarly, the WNBA and tennis players have also been making calls for equal pay, prize money, conditions and infrastructure.

U.S. Soccer told ABC News it does not comment on ongoing legal matters.