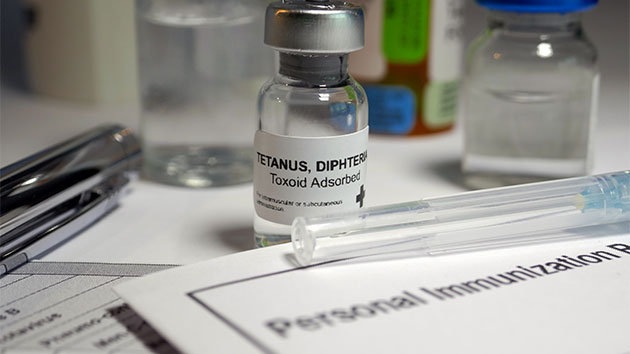 Hailshadow/iStock(PORTLAND, Ore.) — An unvaccinated 6-year-old boy in Oregon spent 57 days in a hospital, including 47 days in the intensive care unit, and racked up almost $1 million in medical costs after being diagnosed with tetanus, according to a new report from the Centers for Disease Control.

The boy was Oregon's first case of tetanus in almost 30 years, according to the CDC, citing the Oregon Health Authority. Tetanus is caused by bacteria found in dirt that can enter the body through breaks in the skin, and vaccines are the best way to prevent it, per the CDC.

The child was cut while playing outside on a farm in 2017 and his wound was treated at home, according to the report, which was written for the CDC's Morbidity and Mortality Weekly Report.

In that outbreak, 61 of the 70 cases were in non-immunized patients, according to the Clark County, Washington, Public Health Department.

The report also comes days after an Ohio teenager spoke to a Senate committee about getting vaccinated after growing up in an anti-vaccine home and after Facebook pledged to fight misinformation about vaccinations.

Six days after the Oregon boy got the cut, according to the CDC report, he had "episodes of crying, jaw clenching, and involuntary upper extremity muscle spasms," then had arching in his back and neck as well as more spasms. Once he had difficulty breathing, he was transported by air to a pediatric medical center, where he was diagnosed with tetanus, according to the CDC.

The report said the boy had jaw muscle spasms and could not open his mouth for water, requiring doctors to insert a tube in his trachea and a ventilator.

He was given a tetanus immune globulin as well as the diphtheria and tetanus toxoids and acellular pertussis (DTaP) vaccine, and then taken to the pediatric intensive care unit to be treated in a darkened room with ear plugs and minimal stimulation due to his spasms, according to the report. He also had his wound cleaned and treated again, the CDC said.

The report said after 47 days in the ICU, the boy spent another 10 days in an intermediate care unit, where he was able to walk 20 feet with assistance and have his tracheostomy removed.

He was eventually transferred to a rehabilitation center for 17 days, and one month after rehabilitation was able to go back to normal activities, according to the report.

The family's total charges for the hospital stay were $811,929, not including air transportation, rehabilitation and follow-up costs, per the report, which noted the average pediatric hospitalization in the U.S. in 2012 cost $11,143.

Use of tetanus vaccines and tetanus immune globulin had led to a 95 percent decrease in tetanus cases and 99 percent decrease in tetanus-related deaths since the 1940s, according to the CDC, which recommends that children receive the DTaP vaccine at ages, 2 months, 4 months, 6 months, 15-18 months, and then at 4-6 years old, and that adults receive tetanus and diphtheria (Td) boosters every 10 years.

The Oregon family ultimately decided against a follow-up DTaP (diphtheria, tetanus, pertussis) vaccination "and any other recommended immunizations" for the boy after his recovery from tetanus, according to the report.