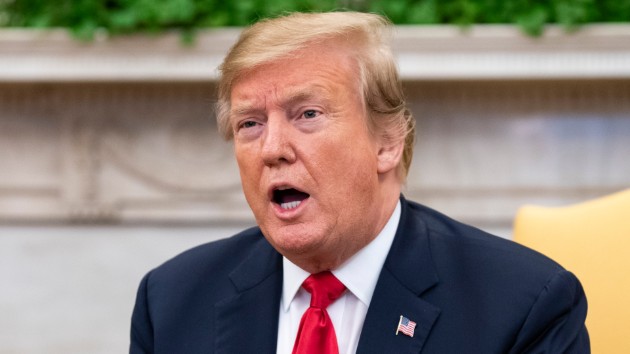 Alex Edelman – Pool/Getty Images(WASHINGTON) — Reacting to news that Paul Manafort was sentenced to nearly four years in prison for tax and bank fraud, President Donald Trump on Friday said he feels "very badly" for his former campaign chairman.
“I feel very badly for Paul Manafort. I think it's been a very, very tough time for him,” Trump said as he left the White House with his wife, Melania and son Barron to tour tornado damage in Alabama before heading to Mar-a-Lago in Florida. He zeroed in on comments both the judge and Manafort's lawyer made about potential collusion between the Trump campaign and Russia.
“If you notice both his lawyer, a highly respected man, and a very highly respected judge, the judge said there was no collusion with Russia. This had nothing to do with collusion there was no collusion. It's a collusion hoax. It's a collusion witch hoax. I don't collude with Russia,” Trump said.
But the president, who said he was "honored" by the judge's statement, misrepresented what he said.
Judge T.S. Ellis didn’t conclude that there was no collusion between the Trump campaign and Russia but instead noted that Manafort was not before his court for any matter related to the issue of collusion. After Ellis noted at the sentencing that Manafort's case did not involve the potential collusion that special counsel Robert Mueller is investigating, Manafort's attorney, Kevin Downing, made similar comments as he left court Thursday evening.
"As you heard in court today, Mr. Manafort finally got to speak for himself and made clear he accepts responsibility for his conduct and I think most importantly what you saw today is the same thing we had said from day one," Downing said. "There is absolutely no evidence that Paul Manafort was involved in any collusion with any government official or Russia."
Asked by ABC News' Kyra Philips on Friday about whether he's ruled out a presidential pardon for Manafort, Trump said it’s not under discussion but also did not go so far as to rule it out.
“I don’t even discuss, the only one discussing it is you,” the president said and then quickly pivoted to calling Michael Cohen a liar for his claims related to past overtures with Trump’s legal team for him.
“I know that in watching and seeing you folks at night that Michael Cohen lied about the pardon. It was a stone cold lie and he has lied about a lot of things. When he lied about the pardon, that was really a lie. And he knew all about pardons. His lawyer said that they went to my lawyers and asked for pardons. And I can go a step above that but I won't go to it now,” Trump said.
Later, Trump tweeted that Cohen "directly asked me for a pardon. I said NO. He lied again!"
The president's comments on Manafort followed a morning tweet in which he decried ongoing Congressional probes related to the topic of potential collusion, saying it is "so bad for our Country!"

Both the Judge and the lawyer in the Paul Manafort case stated loudly and for the world to hear that there was NO COLLUSION with Russia. But the Witch Hunt Hoax continues as you now add these statements to House & Senate Intelligence & Senator Burr. So bad for our Country!

In the past, Trump has offered glowing praise in defense of Manafort and his handling of the charges brought against him.
Soon after Manafort was convicted in August, Trump called Manafort a "very brave man," making a direct contrast to his former personal lawyer and fix, Michael Cohen, who last week testified that Trump had directed him to lie to Congress.

I feel very badly for Paul Manafort and his wonderful family. “Justice” took a 12 year old tax case, among other things, applied tremendous pressure on him and, unlike Michael Cohen, he refused to “break” – make up stories in order to get a “deal.” Such respect for a brave man!

White House Counselor Kellyanne Conway spoke with reporters on Thursday night — shortly before Manafort's sentencing — and, similar to the president's comments Friday morning, emphasized that Manafort's case wasn't related to the issue of potential collusion.
She also expressed the view that the potential punishment he faced — more than 20 years in prison – was overly severe.
"I'm not sure what the sentence was but it did seem what their sentence may be was much than perhaps other people get for bigger crimes," Conway said.
Copyright © 2019, ABC Radio. All rights reserved.