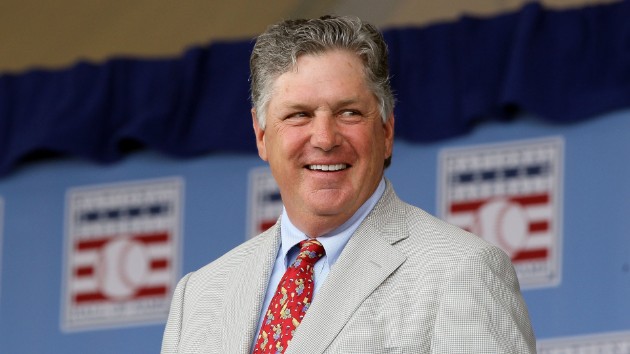 Jim McIsaac/Getty Images(NEW YORK) — Hall of Fame pitcher Tom Seaver, the star of the Miracle Mets 1969 World Series championship team, has been diagnosed with dementia at age 74.
His family made the announcement Thursday through the Hall and said Seaver has retired from public life. He will continue to work at Seaver Vineyards, founded by the retired player and wife Nancy in 2002 on 116 acres at Diamond Mountain in the Calistoga region of California.
Seaver was diagnosed with Lyme disease in 1991, and it reoccurred in 2012 and led to Bell's Palsy and memory loss, the New York Daily News reported in 2013.
"He will always be the heart and soul of the Mets, the standard which all Mets aspire to, this breaks my heart," tweeted former Mets catcher Mike Piazza, a fellow Hall of Famer. "Do not feel worthy to be mentioned in the same breath."
Seaver has limited his public appearances in recent years. He did not attend the Baseball Writers' Association of America dinner in January where members of the 1969 team were honored on the 50th anniversary of what still ranks among baseball's most unexpected champions.
A three-time NL Cy Young Award winner and the 1967 NL Rookie of the Year, Seaver was 311-205 with a 2.86 ERA, 3,640 strikeouts and 61 shutouts from 1967-86. A five-time 20-game winner nicknamed Tom Terrific, Seaver was elected to the Hall in 1992 when he appeared on 425 of 430 ballots for a then-record 98.84 percent. His mark was surpassed in 2016 by Ken Griffey Jr. and this year by Mariano Rivera, the first unanimous selection.
Copyright © 2019, ABC Radio. All rights reserved.