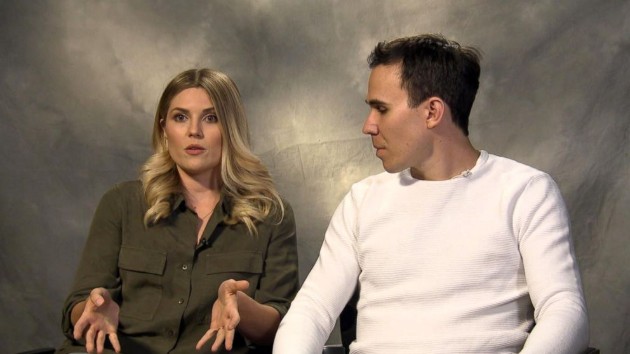 ABC News(NEW YORK) — An IndyCar driver who crashed at a speed of over 200 mph into a wall, a fence and another car spoke about the harrowing experience that left him unable to walk and says he hopes to train hard enough to walk at his wedding, and even get back into his race car.
The crash last August, which was captured on video, could have been deadly for driver Robert Wickens, 29, who sustained multiple injuries to his legs, arms and spine.
Speaking in an exclusive interview with ABC News' Good Morning America from a rehab facility in Colorado, Wickens and his fiancee, Karli Woods, recalled the over half-dozen injuries he suffered in the crash.
Woods said she realized the severity of her partner's injuries "the moment I walked into the hospital room."
"They just said, 'He's paralyzed,'" she said. "And they didn't even know if he was going make it."
She recalled how he looked immediately after the crash, saying he was on a ventilator, "And everything was, you know, casted and in braces and neck brace and black eyes. … That was the hard part."
Wickens explained the long list of injuries he sustained to GMA, which included a broken tibia and fibula in both legs, a fractured right hand, an ulna fracture in his right arm, a dislocated elbow, a broken ring finger, spinal fractures, a concussion and either "four or six" broken ribs.
"I think that's it," he said after listing his injuries.
While doctors couldn't tell the couple if Wickens would ever be able to walk again, he said he is determined, focusing on his recovery with a special goal in mind: His wedding this coming September.
"Goal No. 1," he said, is being able to walk at his wedding.
"And then shortly after that, goal No. 2 is to see … if I'm fit enough to try and get back in an IndyCar for the 2020 season," he added.
He acknowledged that this is a very unrealistic goal, but added, "I've spent my whole life thinking unrealistically."
In the six short months since his accident, Wickens has already made huge strides in his recovery: standing on his own, walking with a walker and even pedaling on a bike.
He says he's never worked this hard for anything in his life, "not even close."
"I've been a hard worker my whole life, but this … nothing even comes close to, to what this is," Wickens said.
The race car driver said he strives to be the best in what he does, and that includes "I want to be the best spinal recovery … in the history of spinal recoveries."
"I'm getting more and more back every day," he added. "There still … some numb spots for sure … and then I'm starting to feel some pain."
He said he welcomes the feelings, however, noting how when he was doing laundry the other day he took "everything out of the dryer and put it on my lap."
"And I could feel the heat of, like, the clothes," he said. "And that was, like, the first time … I've noticed that I felt temperature."
This weekend, the couple will travel to St. Petersburg, Florida, to watch the start of the IndyCar season, remaining hopeful that one day he'll be back behind the wheel.
Despite everything, Woods said she supports seeing her fiance's return to a race car, if he wants to compete again.
"I do now. If you asked me that a few months ago it would be a hard no," she said. "I did not want him to race again."
She added that she was "so afraid to lose him" during the first month after his injury.
"And now, you know, I just see all of the work that he's putting into everything," she said. "And I look forward to the day that he gets back in a car."
Despite almost dying, Wickens said he has no hesitancy to get back behind the wheel.
"Maybe I take half a lap and go, like, 'Nope, nope, nope,'" he quipped. "'Not for me,'" but I really don't see that happening."
If there is one thing Wickens hopes people take away from his story it is "to show anybody out there that nothing's impossible."
He continued: "That all you have to do is just work hard, and hard work and determination prevails, every single time."