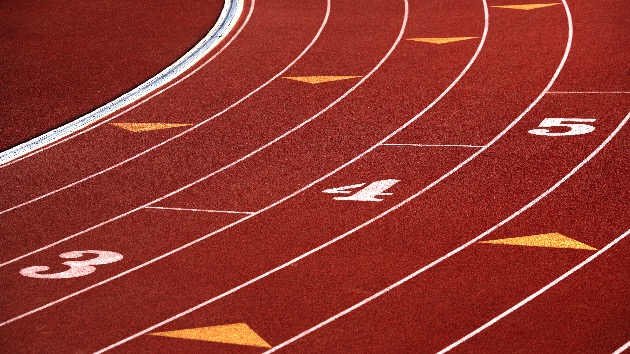 Zeiss4Me/iStock(CAMBRIDGE, Mass.) — Jaws dropped when Harvard University junior Kieran Tuntivate managed to win two races in this year's Ivy League Heptagonal Championships, despite a gruesome injury that left him with a large open wound on the bottom of his foot.
Tuntivate, 22, thought he had a serious case of bad luck on Feb. 23 when another runner stepped on his foot and caused him to lose his shoe during the first lap of an intense 3,000-meter race at the indoor meet.
Tuntivate, who's been running competitively since age 12, said he only had two options in the moment: stop to recover his shoe and likely lose the race or keep running and risk an injury. He decided to keep going and he ended up winning the race without his left shoe. But the top prize came at a bloody and painful price.
"It felt kind of natural at first, but I kind of expected it to start hurting eventually with the really abrasive surface of the track," Tuntivate told ABC News in an interview on Thursday. "Around 2,000 meters — about two-thirds into the race — is when it really started to hurt.
"I think the damage was probably the same as if you were running on loose gravel or cinder surface," he added.

SHOELESS KIERAN TUNTIVATE.
The @HarvardTrack_XC junior loses his shoe on the first lap, then goes from third to first down the stretch to win the #IvyHeps Indoor 3,000! pic.twitter.com/ylz3nTLibz

Despite the risk of sustaining a serious injury, Tuntivate said he never seriously considered stopping.
"It's the Ivy League Championships, so there's a lot of history there and a lot of rivalries with the other schools," he said. "Instincts just kicked in. I didn't really think about how much my foot was going to be damaged afterward. If I had known, I probably would have stopped."
Harvard cross country and track and field coach Alex Gibby said he thought about stopping Tuntivate mid-race, but the athlete's cool and calm demeanor convinced him to let the junior continue.
"One of the things you're evaluating as a coach when something like this happens is how is the athlete is responding. If he's frantic, if he's beside himself or if he's lost control in the moment, then you're probably going to pull him out," Gibby told ABC News on Thursday. "I realized that he wasn't panicked and I said, 'The heck with it, let's let this thing ride.'"
Tuntivate said he lost a lot of skin by running on what "felt like sandpaper." He said his doctor compared the skin loss to what one experiences after a third-degree burn, but the runner kept pushing and managed to win in the 5,000 meters the following day.
"From my prospective, where his legend was cemented was coming back the next day on a bum wheel, in his training flats and finishing the job off in the 5,000. That's what was really special," Gibby said. "Ninety-nine percent of the people in his situation wouldn't have finished the race in the 3,000. Of the remaining 1 percent, another 99 percent probably would not have started the next day."
Tuntivate said he's still in a lot of pain two weeks later, but his foot seems to be about 90 percent healed. And although it feels good to win, the lingering pain and the annoying aftercare makes him wonder if he made the right decision.
"It was definitely pretty gory at first. I thought there was no way that I would be able to run the 5K the next day," Tuntivate said. "I wouldn't advise others to do the same thing. I would tell them to stop and put their shoe on or either stop and wait for another race.
"I don't think it's worth the amount of pain and discomfort," he added.
Copyright © 2019, ABC Radio. All rights reserved.