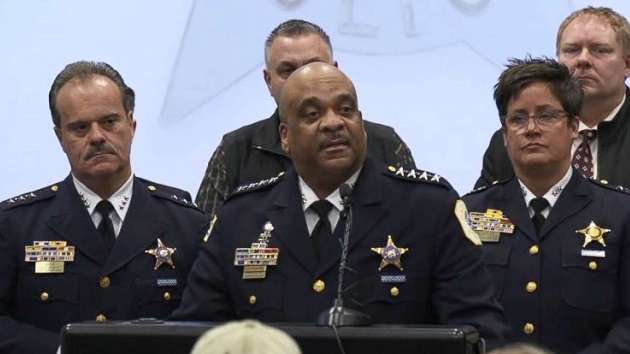 ABC News(CHICAGO) — The Chicago Police Department is conducting an internal investigation to determine who anonymously leaked information about the Jussie Smollett case to members of the press.
Anthony Guglielmi, a spokesman for the police department, confirmed to ABC News that the probe was launched last month "during the interrogation of the brothers when information leaked out," referring to the two Osundairo brothers who investigators said helped stage an attack on the Empire actor in late January.
"I will also add that there were several agencies briefed with information during that time and some of the information that went out was not factually accurate," Guglielmi told ABC News Thursday evening. "These types of investigations are fairly common so that we can determine if we have any integrity issues for future cases."
The internal investigation was first reported by TMZ.
Smollett told police he was attacked by two masked men near his apartment in Chicago around 2 a.m. on Jan. 29. The two men, Smollett initially said, shouted racist and homophobic slurs at him as a rope was wrapped around his neck and an unknown chemical was poured on him. The alleged assailants, police were told, yelled "MAGA country," a reference to President Donald Trump's "Make American Great Again" slogan.
Police identified and questioned two "persons of interest" captured on surveillance video near the scene around the time of the alleged attack. Those men, Abimbola and Olabinjo Osundairo, were arrested on Feb. 13, but police didn't charge them and said at the time neither remained a suspect.
While being questioned by investigators, the brothers claimed Smollett paid them $3,500 to help orchestrate and stage the crime after he became upset that a letter threatening him, sent on Jan. 22 to the Fox studio where the television series Empire is filmed, did not get enough attention, law enforcement sources told ABC News.
The memo line on the $3,500 check read that it was for personal training, sources said. Police obtained a search warrant for the check and have text messages between Smollett and the brothers as well.
On Feb. 20, Smollett was charged with felony disorderly conduct for filing a false crime report. By that evening, police officially had classified the actor as a suspect in the ongoing investigation. Detectives subsequently presented evidence to a Cook County grand jury.
Smollett, who has consistently denied any role in staging the supposed crime, turned himself in to police the next morning.
A judge set bond at $100,000 and ordered Smollett to surrender his passport. The actor, who pleaded not guilty, was released after posting 10 percent of his bail. His next court appearance is scheduled for March 14.
Copyright © 2019, ABC Radio. All rights reserved.