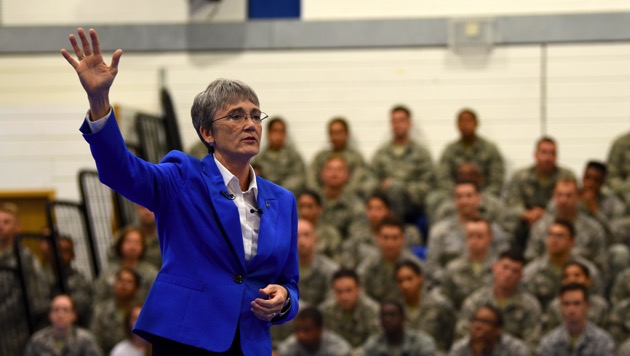 Smith Collection/Gado/Getty Images(WASHINGTON) — Air Force Secretary Heather Wilson said Friday she is stepping down to become president of the University of Texas-El Paso.
Wilson, 58, will remain in her post until the end of May.
"It has been a privilege to serve alongside our Airmen over the past two years and I am proud of the progress that we have made restoring our nation’s defense," Wilson said in a statement released by the Air Force.
"We have improved the readiness of the force; we have cut years out of acquisition schedules and gotten better prices through competition; we have repealed hundreds of superfluous regulations; and we have strengthened our ability to deter and dominate in space," she added.
In a letter to acting Defense Secretary Pat Shanahan, Wilson said that pending a favorable vote by the University of Texas Board of Regents she would resign effective May 31.
"This will allow sufficient time for a smooth transition," wrote Wilson.
The University of Texas confirmed to ABC News that Wilson has been voted by its Board of Regents as the sole finalist to become the next president of the University of Texas at El Paso (UTEP).
By Texas state law, there is a 21-day waiting period before the Regents vote is officially finalized.
The former New Mexico congresswoman and Air Force officer has been leading the Air Force since May 17, 2017.
Since then she has become best known for keeping President Trump’s envisioned Space Force as a separate service within the Air Force.
President Donald Trump had initially advocated for the new Space Force to become a separate department, but Wilson had pushed for it to become a new service under the Air Force, similar to how the U.S. Marine Corps falls under the Department of the Navy.
But the final White House plan for the new service issued in February called for Space Force to fall under the Department of the Air Force as Wilson had advocated.
Copyright © 2019, ABC Radio. All rights reserved.

Dwayne Johnson reacts to new poll finding Americans would vote for him for president
Dwayne Johnson hilariously reacts to new poll claiming he’s most likely to be voted president
Biden willing to negotiate aspects of $2 trillion infrastructure plan: Energy Secretary Granholm
New poll finds nearly half the country would vote for Dwayne Johnson if he ran for president
‘Thunder Force’: Octavia Spencer & Melissa McCarthy explain why their “empowering” action-comedy came out at the perfect time
‘The Goldbergs’ to air tribute to George Segal on his final show