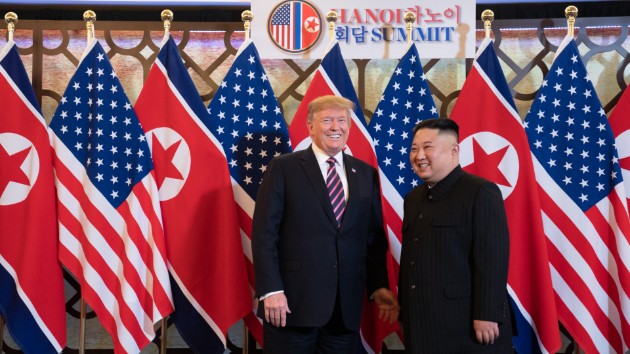 Official White House Photo by Shealah Craighead(SEOUL, South Korea) — North Korean state television aired a documentary about Kim Jong Un's recent summit with U.S. President Donald Trump, but the film didn't mention how negotiations broke down and that nothing actually was decided.
The 75-minute film on Korean Central Television, a state-run channel focused on propping up the regime, aired six days after Kim met with Trump in Hanoi, Vietnam, and portrayed the North Korean leader favorably, taking a stroll with the president inside their hotel's garden.
Instead of discussing how negotiations broke down, the film's narrator talked up the relationship between the two leaders, saying, "If the U.S. and North Korea are determined to solve problems, they can design a whole new future."
Hwi-rak Park, a political science professor at Kookmin University, told ABC news the documentary "is propaganda," nothing more than an effort toward bolstering Kim's image "by not mentioning the collapse of the Hanoi summit."
Intellectuals in North Korea may have noticed," Park added, "but the general public does not require their leader to bring back a signed agreement after a trip abroad."
Trump expressing confidence in Kim may be the one "silver lining" from the summit for North Korea, said Cheong Seong-chang, vice president of research planning at the Seoul, Korea-based think tank Sejong Institute.
"The talks were carried out in a favorable manner," he added, "and Trump expressed his confidence in Kim."
The narrator of the Korean Central Television film also expressed high expectations for another summit, emphasizing that Trump expressed an interest in meeting more often with Kim to keep improving the relationship between the two countries.
The film contained "only vague comments" about "easing tensions and making peace in the Korean peninsula," said Philo Kim, a professor at the Institute for Peace and Unification Studies at Seoul National University. North Korea seems unable "to accept that there was no agreement made in Hanoi."
Copyright © 2019, ABC Radio. All rights reserved.