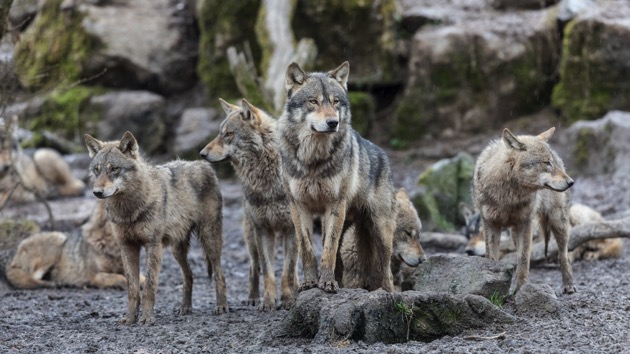 Waitandshoot/iStock(WASHINGTON) — The Trump administration’s proposal to remove gray wolves from the federal endangered species list could amount to a “death sentence”, according to outraged conservation activists.
Acting Interior Secretary David Bernhardt said in a speech Wednesday that the U.S Fish and Wildlife service will soon introduce a rule proposing to remove the gray wolves from the endangered species list in the lower 48 states, according to a statement from an agency spokesperson. His comments came during an address to the North American Wildlife and Natural Resources Conference in Denver, The gray wolf has been listed as endangered in most of the country since 1978 after farmers and ranchers depleted the population to less than a thousand in order to protect their livestock. Since that time the population of gray wolves across the US has increased by 300% where there are now an estimated 5,691 gray wolves across the lower 48 states.
But conservation advocates say that recovery efforts are nowhere near complete and that removing federal protections will only lead the wolves closer to extinction.
Marjorie Mulhall, the legislative director for Lands, Wildlife and Oceans at Earthjustice, a non-profit environmental group, said that data shows that states, where gray wolves have been delisted from federal protection, have faced greater threats.
“Wolves have lost Endangered Species Act (ESA) protections in Idaho, Montana and Wyoming, that goes back to 2011 and in just those three states nearly 3,500 wolves have been killed,” she said.
“Stripping protections would be a death sentence for gray wolves across the country,” said Collette Adkins, a senior attorney at the Center for Biological Diversity. “The Trump administration is dead set on appeasing special interests that want to kill wolves.”
Last year, the administration proposed changes to the Endangered Species Act, a move which was also criticized by environmentalists as harmful to species that have been protected by the ESA since the 1970’s such as the gray wolf. The informal announcement does not mean that the policy will go into immediate effect. Once the proposal is officially released, there will be time made for public comment. A similar proposal to remove the gray wolf was made by U.S Fish and Wildlife back in 2013, but a peer-reviewed panel rejected this proposal because they didn’t use the “best available scientific information.”
Copyright © 2019, ABC Radio. All rights reserved.